Captain Sam Cane scored an early second-half try to spark a 14-point turnaround for the Chiefs as they continued a remarkable unbeaten streak over the Blues. 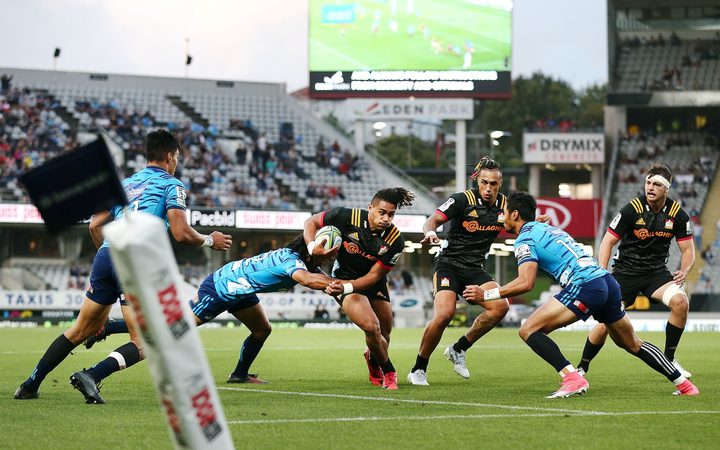 Johnny Faauli of the Chiefs on the charge against the Blues at Eden Park. Photo: Photosport NZ / Anthony Au-Yeung

The Chiefs had been trailing the Super Rugby encounter 14-10 at halftime before Cane and scrumhalf Brad Weber touched down within two minutes of each other early in the second half, turning the game towards the visitors.

Colin Cooper's injury-riddled side then withstood a furious onslaught from the hosts, who had several opportunities to seal victory in the final minutes but lacked the composure to take them.

The Chiefs have not lost to their neighbours since March 2011, a run of 13 matches. It is the longest unbeaten run against one side by another in Super Rugby.

The defeat also continued a long barren spell against fellow New Zealand sides for the Blues, who have not beaten any of their compatriots since the first round of the 2016 season, when they beat the Otago Highlanders 33-31 at Eden Park.

The match was something of a paradox, characterised by searing breaks through poor individual defence and brutal one-on-one tackles with several players left lying on the ground after crunching collisions.

The Blues had taken a four-point lead at the break through tries to Augustine Pulu and impressive number eight Akira Ioane.

The Chiefs, however, sparked by blistering runs by left winger Solomon Alaimalo that gave them field position, managed to score twice themselves with number eight Taleni Seu and right winger Sean Wainui crossing.

The visitors could have been in front had the normally accurate Damian McKenzie not missed a penalty and both conversions.

The visitors, however, looked more composed at the start of the second half and snatched the lead when Cane was driven over and extended the advantage when Weber pounced on a dropped ball by Melani Nanai and sprinted 35 metres untouched.

The Chiefs had looked to have put the game beyond doubt when McKenzie finally slotted a penalty to extend the lead to 27-14.

The Blues, however, dominated the final quarter and put the Chiefs under pressure that after a sustained buildup allowed flyhalf Bryn Gatland to ghost through the stretched defence.

The home side, however, were unable to get any closer and only had themselves to blame in the final minutes when they lacked the organisation and execution to capitalise on two line-outs just metres from the try-line.