New Zealand will send its biggest ever cycling team to April's Commonwealth Games on the Gold Coast. 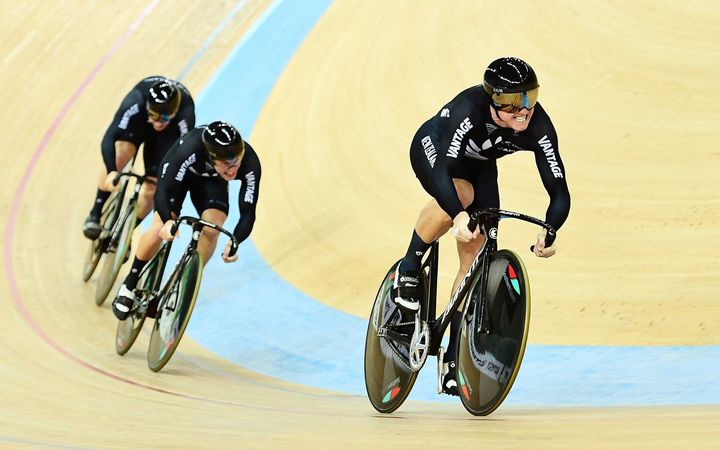 Another prominent name is the remarkable Hamish Bond, who will compete in the Time Trial and Road Race after switching from rowing following the Rio Olympics. In his illustrious rowing career, the 31-year-old won two Olympic gold medals and nine world championships.

The New Zealand cycling team collected a record 15 medals in Glasgow from a 29-strong team.

Webster won a bronze medal at Delhi in the sprint, and earned two gold medals and a silver at Glasgow while team sprint team-mate Dawkins won a bronze in Delhi along with bronze and gold in Glasgow.

Villumsen earned a silver in that discipline in Delhi and a gold medal in Glasgow.

Shane Archbold, who won gold and bronze on the track in Glasgow, is moving to the road for Gold Coast.

Other medallists from 2014 heading to the Gold Coast include Ethan Mitchell (team sprint), Sam Gaze (mountain bike), Dylan Kennett (team pursuit) and Mitchelton-Scott professional Jack Bauer, who won the silver in the road race at Glasgow.

Twenty riders will be making their Commonwealth Games debut although track riders Zac Williams, Natasha Hansen, Olivia Podmore and Racquel Sheath were all part of the team for the Rio Olympic Games.

Cycling New Zealand's development programme will see seven teenagers competing, with the youngest track rider Ellesse Andrews, 18, who was awarded the emerging athlete at the Halberg Awards after her world record in winning the individual pursuit at the junior world championships last year.

At the other end of the spectrum is 36-year-old Kate McIlroy who will compete in her third Commonwealth Games, remarkably all in different sports. She was fifth in the 3000m steeplechase at Melbourne in 2006, 12th in the triathlon at Glasgow and will race in the women's road race on the Gold Coast. She is also a former mountain running world champion and Halberg sportswoman of the year.

There are six past or present elite world champions in the team with McIlroy and Bond joined by Villumsen and current team sprint world champions Mitchell, Webster and Dawkins.

NZOC CEO Kereyn Smith extended her congratulations to the athletes.

"We're extremely pleased to be naming our largest ever cycling team for the Commonwealth Games," said Smith.

"This is a team brimming with experienced riders who know what to expect from Games environments and have proven their mettle at this level.

"This team will be up against tough competition but it has extremely strong medal potential and I know the riders will want to better the 15 medals won by cyclists at Glasgow 2014."

"We know the hosts are going to be incredibly strong. In track cycling especially, they have bypassed the world championships to focus on the Commonwealth Games, while we are targeting the worlds and looking to hold that peak to Gold Coast," said Barras.

"We have high hopes in mountain bike with the gold and silver medallists returning and also now both with global titles to their name.

"The professional road teams have not, in the main, released their riders for the Commonwealth Games. To that end we are thrilled that World Tour riders Jack Bauer and Alex Frame have clearance to compete, along with Georgia Williams and Rushlee Buchanan in the women.

"We are excited to have Hamish Bond in the team. He is a remarkable character and his sporting prowess is legendary. He has already impressed us to make this standard after less than two years in our sport.

"We have a large number of young riders in the side who have earned their place by performance but at the same time will benefit greatly from the experience of this multi-sports environment as we also prepare ahead to Tokyo and beyond."

Barras said they are continuing discussions with some cyclists from other disciplines who will double-up as support riders in the men's and women's road races.

The naming takes the total number of athletes selected to the New Zealand Commonwealth Games team to 151.