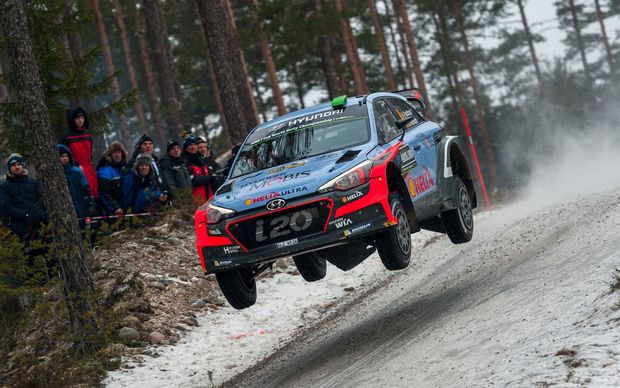 Thierry Neuville led a Hyundai one-two-three over the snowy stages.

The Belgian ended the day with a 4.9 second lead over Norwegian Andreas Mikkelsen, with Hayden Paddon in third place on his first WRC outing of the season.

World champion Sebastien Ogier, winner of last month's season opener in Monte Carlo for M-Sport Ford, was 12th and two minutes 48 seconds off the pace after 140km of action mostly in Norway.

Fresh snowfalls had made conditions trickier for those starting earlier, with few visible lines to follow.

"We have just tried to stay focused on the job and doing what we can from our middle road position," said Neuville. "We set ourselves the goal of being consistent and fast, not making any mistakes.

"The cars at the front have suffered a bit in the snowy conditions. Every time I pushed I felt that I was creating faster lines for the guys behind to follow, so it was a tricky balance."

Paddon said, "It is great to be back for our first WRC event of 2018. Our objective today was to get the rhythm back. The conditions were not easy. We had to be conscious of keeping the car in the lines, and adapting both the car and my driving to suit the stages. The ruts became really pronounced in the afternoon loop. If you go outside of the lines, you become a passenger in your own car, so we had to pull back a bit at times. The road position has helped but we wanted to have a sensible approach to the day, and a clean run, which we have had. There is room for improvement, but the positions are encouraging and there'll be more to give tomorrow."