Marcus Stoinis is relishing his return to the ground which launched his international career as Australia's Twenty20 side prepare to face New Zealand in Auckland.

With a spot in next week's tri-series final already locked up, the visitors will be out to maintain their unbeaten run when they play the Black Caps on Friday night at Eden Park.

The ground holds fond memories for Stoinis, who became the talk of the cricketing world when he scored an incredible 146 not out during last summer's one-day international series. 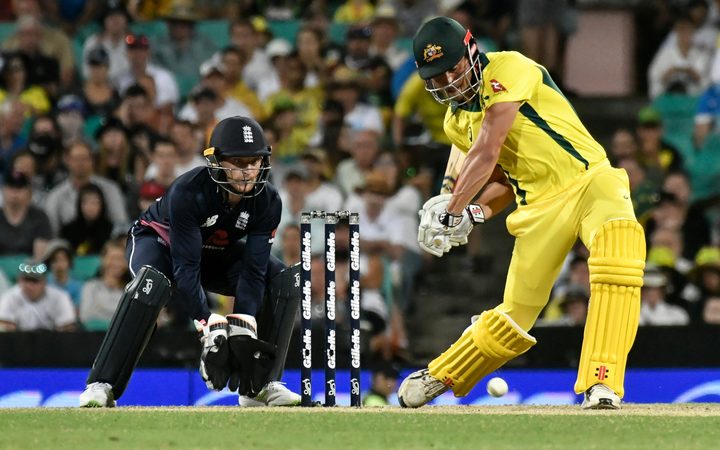 Marcus Stoinis of Australia goes on the attack against England. Photo: Photosport

Australia fell six runs short of their target when Josh Hazlewood was run out at the non-striker's end without facing a ball.

But it was a special knock from Stoinis, who in just his second ODI, became the first Australian to make a hundred and take at least three wickets (3-49) in

Even the famously raucous Eden Park crowd showed their respect by giving Stoinis a standing ovation when he reached his ton.

"I've heard it's pretty rare. Our coach (Darren Lehman) apparently got hit by a fish one time off the boundary," Stoinis quipped.

"That was amazing for me and very respectful from the crowd. I found out later how rare that it is so a very special moment for me."

Stoinis made his limited-overs debut during Australia's tour of England in 2015 but was unable to force his way back into the side until being called up at Eden Park.

"My career pretty much started here so I'm excited to be back," Stoinis said.