The French club Lyon has confirmed it's signed former All Black Charlie Ngatai.

The Chiefs midfielder said yesterday he was set to head to France at the end of the Super rugby season but said he hadn't yet signed a deal.

Lyon has today announced on social media that Ngatai who played his sole test for New Zealand in 2016 had signed with them. 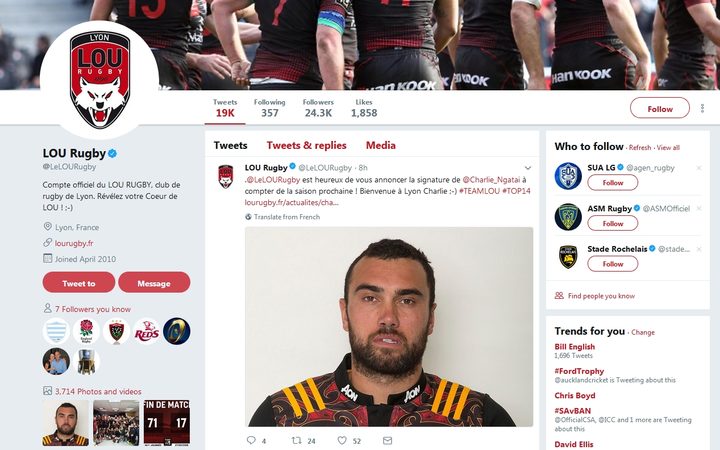 Yesterday Ngatai said his decision was influenced by the impact the concussion had had on his career.

He said he wanted to secure his financial future now rather than try to push his way back into All Blacks contention ahead of the 2019 Rugby World Cup in Japan.

"That's another reason why we looked overseas as well, you never know when your career's going to finish," he said, adding that the depth of talent in the All Blacks midfield would make it a challenge to break through.

"I guess a lot of it comes down to money. And then opportunity - there's a lot of young players coming through in New Zealand, and places in the All Blacks team are a lot harder."

Ngatai joins 16-test first five Lima Sopoaga and the uncapped Hurricanes flanker Brad Shields as promising players confirmed to be heading abroad at the end of the 2018 Super Rugby season.

Shields, who has already said he is headed to English club Wasps, has been on the fringe of the All Blacks for a number of seasons without being selected and qualifies automatically for England through his parents.

Both were in their mid-20s when they left and had been considered having important roles to play for the All Blacks in coach Steve Hansen's planning for the 2019 tournament, where the team are seeking a third successive title.