A record-breaking century from the red-hot Colin Munro has propelled New Zealand to a 119-run thumping of the West Indies in the third and final Twenty20 international in Mount Maunganui. 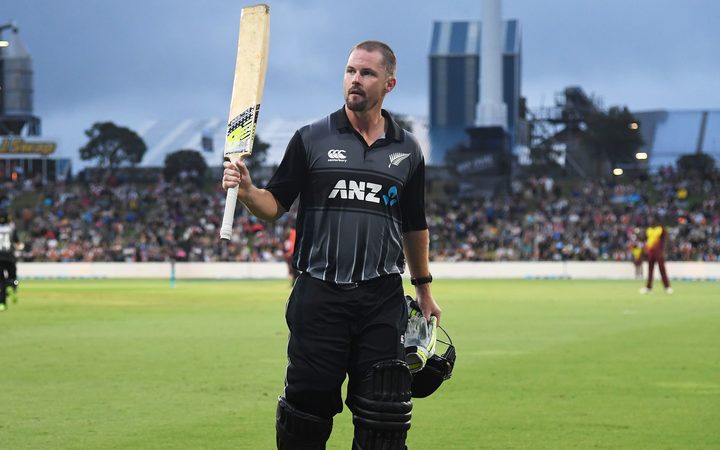 Munro's 104 on Wednesday night made him the first player to score three hundreds in T20 internationals, with all three coming in less than a year.

Their previous best was 214-6 against Australia in Christchurch in 2010.

The game ended with the visitors 124-9 in the 17th over and Shai Hope unable to bat because of injury, sealing the Black Caps biggest winning margin in the format and a 2-0 series victory.

It finished a woeful and winless tour for the Windies, who also lost both test matches and all three one-day internationals.

Ish Sodhi and seam spearheads Tim Southee and Trent Boult bagged two wickets apiece for the hosts, leg-spinner Sodhi the pick of the bunch with impressive figures of 2-25 from his four overs.

There was no doubt about the man-of-the-match and star of the evening, though.

Munro had scored half-centuries in the first two matches of the series and this time the 30-year-old left-hander kicked on, smacking 10 sixes and three fours along the way.

He brought up his fifty by flicking 36-year-old seamer Rayad Emrit's debut ball in international T20 over the square leg boundary.

He promptly followed up with another six, this time over mid-wicket.

He featured in a 136-run opening stand with Martin Guptill, who contributed 63 in 38 balls.

Guptill fell midway through the 11th over, caught behind to give Emrit his maiden wicket.

Munro lasted until the final over, caught at long-on off paceman Carlos Brathwaite.

Skipper Brathwaite had his side's best figures of 2-50, while Emrit, despite the torrid start, finished as the most economical bowler with 1-42 from his four overs.

The West Indies trailed 1-0 in the T20 series after game two, also at Mount Maunganui two days ago, was abandoned at the end of nine overs because of rain.

New Zealand move into matches against Pakistan, starting with the first ODI at the Basin Reserve in Wellington on Saturday.