A record-breaking partnership between centurions Dawid Malan and Jonny Bairstow has been followed by a collapse of 6-35, with England posting a first-innings total of 403 on day two of the third Ashes Test. 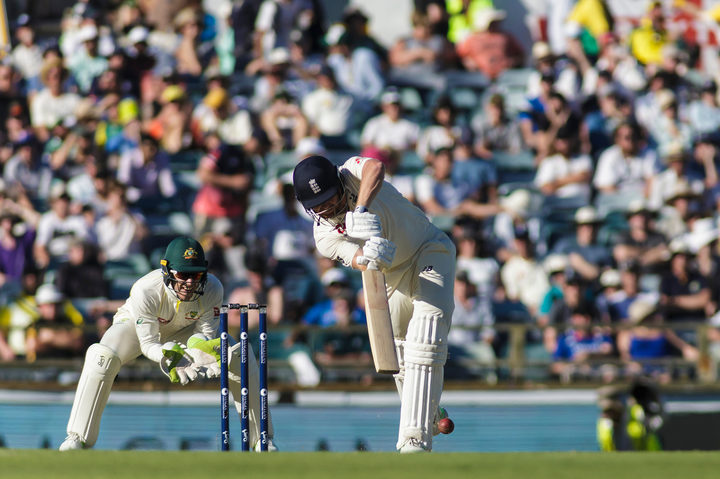 Australia ran out of reviews amid the 237-run stand between Malan and Bairstow as England, down 2-0 in the five-Test series, continued their WACA fightback.

However, the extended session finished with a flurry of wickets in what was the latest twist in a series featuring plenty of momentum shifts.

Malan and Bairstow produced England's highest fifth-wicket partnership in a Test against Australia.

It ended when substitute fielder Peter Handscomb completed a remarkable catch, sprinting then diving at full length to dismiss Malan for 140.

Mitchell Starc, Josh Hazlewood and Pat Cummins cleaned the tail up quickly and relatively clinically, although a booming six from Stuart Broad pushed the total beyond 400.

Bairstow, who resumed on 75, was undone on 119 by a yorker from Mitchell Starc that rattled middle stump.

The keeper, promoted one spot up the order for this game, celebrated his century by headbutting his helmet - a nod to the infamous bar greeting of Cameron Bancroft that resulted in a midnight curfew for the visitors.

Malan and Bairstow dominated the first hour of play. They scored a single run from the opening five overs then kept the scoreboard ticking over with ease.

Malan, who was dropped on 92 by Cameron Bancroft on day one, continued to make the hosts pay until he opted to hit against the spin of Nathan Lyon.