The Black Caps have won the second cricket Test against the West Indies by 240 runs with a day to spare at Seddon Park in Hamilton. 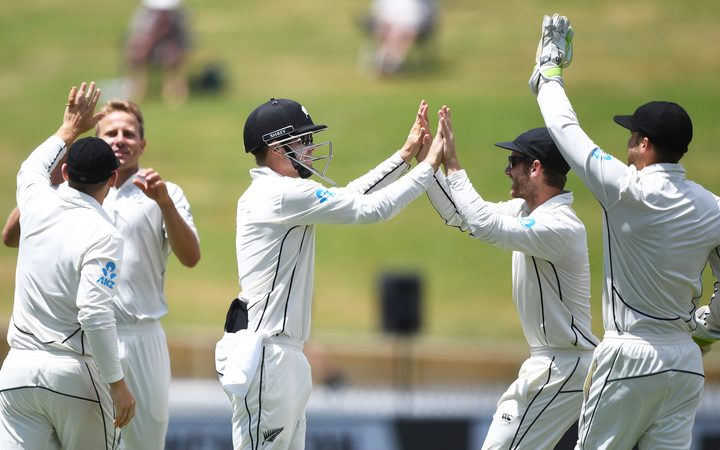 The Black Caps celebrate the fall of another West Indies wicket. Photo: Photosport

New Zealand spinner Mitchell Santner claimed the final two wickets of the match in the same over - reducing the visitors to 203 all out.

Roston Chase was the best of the visitors' batsmen in the second innings, reaching 64, while Raymon Reifer put on a stoic performance at the tail end with 23 runs.

New Zealand's win in Hamilton secures the two match series for the hosts, winning both Tests.

Starting day four at 30 for two and still needing another 414 runs to win, Trent Boult made an early breakthrough for the home side when he took his 200th test wicket in dismissing Kraig Brathwaite for 20.

Boult is the sixth New Zealand bowler to reach the 200 mark with Sir Richard Hadlee sitting at the top on 431 wickets, while Tim Southee sits just seven wickets ahead of him on 207.

Shai Hope (23) was the next go caught at fine leg off the bowling of Neil Wagner who also dismissed Shane Dowrich for nought, when he was caught in close.

The Black Caps celebrate the fall of another West Indies wicket. Photo: Photosport

Sunil Ambris was forced to retire hurt for five, after being struck on the arm by a short pitched delivery.

He has headed to hospital for x-rays.

The West Indies, who made the highest successful fourth innings chase on New Zealand soil of 348 at Eden Park in 1969, needed a world record 444 for victory.

New Zealand won the first match of the two-Test series by an innings and 67 runs in Wellington.

Look back on the match here: