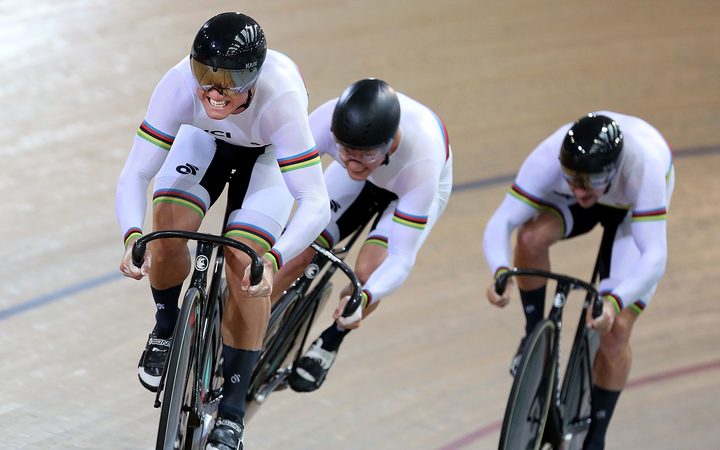 Ethan Mitchell, Sam Webster and Eddie Dawkins give it everything. Photo: Dianne Manson

After qualifying fastest on the first day of the event, Ethan Mitchell, Sam Webster and Eddie Dawkins were quickest in winning the second round in 43.916s, reverting to their proven formula with Mitchell starting.

They drew Great Britain in the final, and improved again to win the final in 43.336s, more than half a second clear.

Great Britain were level with the Kiwis after the first lap, with Webster opening a 0.2s advantage in the man-two position, while Dawkins powered home in the anchor leg nearly half a second faster than his opponent for an emphatic win.

The women's team pursuit earned the silver medal after the host Canadian team turned up the heat in the 4000m final.

Earlier, the Kiwi team were the fastest in the first round in 4:25.012, just 0.3s faster than the Canadians to qualify for the gold medal ride.

New Zealand, resting Racquel Sheath to focus on the omnium, were on schedule at the 2000m mark. While they dropped in the third kilometre, Canada, boosted with two fresh riders, turned up the heat. They had a sizeable advantage at the 3000m mark and caught New Zealand just before the finish.

Despite the result, New Zealand gained invaluable ranking points for their second placing as they look forward to next week's World Cup in Chile.

Natasha Hansen, who returned from injury to impress at the recent Oceania Championship, recorded 11.005s in the individual sprint qualifying. Her time was the third fastest, her highest qualifying place in a World Cup, behind Olympic and world champion Kristina Vogel of Germany.

Hansen won through to the bronze medal ride, ultimately pipped by just 9/100ths of a second in the deciding third ride against Laurine van Riessen of the Netherlands to settle for fourth place.

Sheath finished eighth overall in the women's omnium. She placed fifth in the scratch race, ninth in the tempo, fifth in the elimination and 11th in the points with Japan's Yumi Kajihara taking the overall honours from Beveridge.