Michael Cheika has been ordered to moderate his coaching box language and conduct after escaping punishment for his foul-mouthed rant at Twickenham last week. 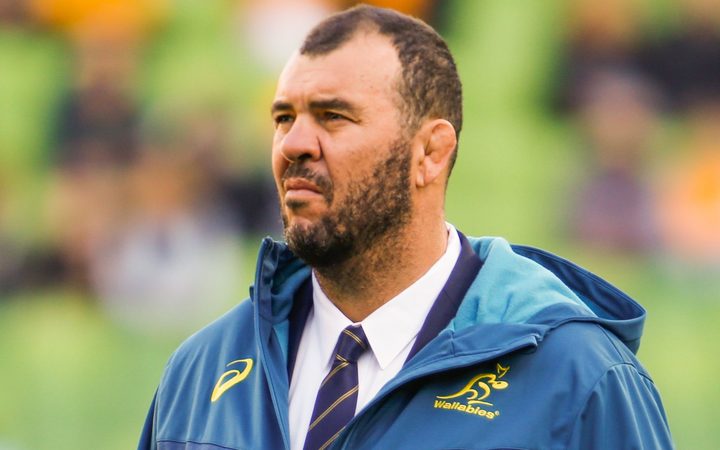 The Wallabies coach was under investigation after being caught on camera calling match officials "f......ing cheats" following a disallowed Michael Hooper try in last week's loss to England.

Cheika was also seen clapping sarcastically and getting involved in a heated discussion with an England spectator as he made his way down to the sideline in the the 30-6 defeat.

After a three-day probe into the incidents by the Autumn International Disciplinary Committee, who are overseeing the Wallabies' spring tour, a decision was made to clear the 50-year-old on Friday (NZ time).

"Following various media reports and a referral from World Rugby, the disciplinary officer for the autumn internationals conducted an investigation into comments and conduct attributed to the head coach of the Australian national team, Michael Cheika," a statement read.

"Mr Cheika and the ARU (sic) co-operated with the investigation, which has now been completed.

"In light of Mr Cheika's explanations of his conduct, his clear understanding of the need to protect and promote the interests of the sport and his open apology for any offence caused, the disciplinary officer for the Autumn Internationals (in consultation with World Rugby) has decided not to pursue any disciplinary proceedings.

"The disciplinary officer has, however, urged Mr Cheika to be aware of the risks during matches when he knows he will be being filmed and potentially broadcast, and where possible to moderate his conduct and language accordingly.

"Mr Cheika has accepted the position."

The Wallabies play Scotland on Sunday (NZ time) in their final match of 2017 at Murrayfield.