American tennis star Venus Williams reached her 23rd Grand Slam semi-final with a thrilling win over Petra Kvitova in a final-set tie-break of their US Open quarter-final. 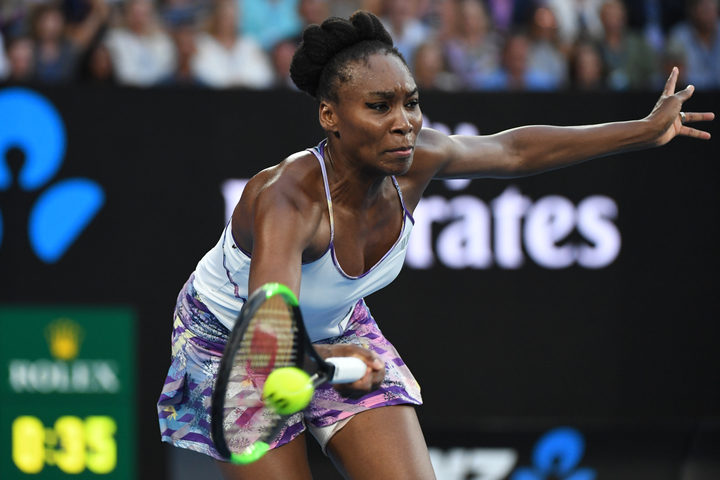 Venus Williams is one win away from the US Open final. Photo: AFP

"I was so fortunate to win that match," said Williams. "It came down to the wire and I'm hoping we have more matches like that."

She next faces Sloane Stephens, with all-American semi-finals possible.

Madison Keys and Coco Vandeweghe will try to join their compatriots in the last four when they play their quarter-finals tomorrow.

"I would love the top four, five to be that (American) again," added Williams. "That would be huge."

Kvitova, 27, missed out on a first US Open semi-final, ending a remarkable run just nine months since she suffered a knife attack at her home, which left her requiring surgery to her playing hand.

"Everything she has gone through is unbelievable," said Williams.

"It's wonderful to see her back and playing. I was so excited to see her playing well, to be able to play her. I hope we have more matches like that."

Given primetime billing in the opening night session slot, the match began with errors from both women and ended in a gripping finale.

The pair had met five times before and each time they had needed three sets, twice a final set tie-break, and once again there was nothing between them.

A weather warning in the second set resulted in a delay of 10 minutes as the roof was brought across, and it intensified the atmosphere as the noise built from 23,000 spectators.

Williams gave up the first break of serve at 3-1 with three double faults, before reeling off five straight games as Kvitova racked up the errors.

A loose Williams game early in the second offered Kvitova the lifeline she needed, and she clung on through several edgy service games.

The Kvitova celebratory scream was now regularly reverberating around the stadium as every game seemed to throw up mini-crises, saving five break points on her way to clinching the set.

Two brilliant cross-court backhands gave Kvitova an early break in the third but Williams recovered from 3-1 down, levelling when the Czech double-faulted.

The scrappy play of earlier was long forgotten as the pair now traded service games, with Williams coming through a 10-minute game at 4-4 as Kvitova pressed hard.

It came down to a tie-break and a brilliant return at 1-1 was enough to give Williams the momentum in the decisive shoot-out.

Roared on by the New York crowd, the 2000 and 2001 champion powered 6-1 clear, enough breathing space to cope with a double fault on her first match point before converting her second.