British cyclist Chris Froome has stormed to victory in the stage 16 individual time trial of the Vuelta a Espana, extending his overall lead to a nearly two minutes. 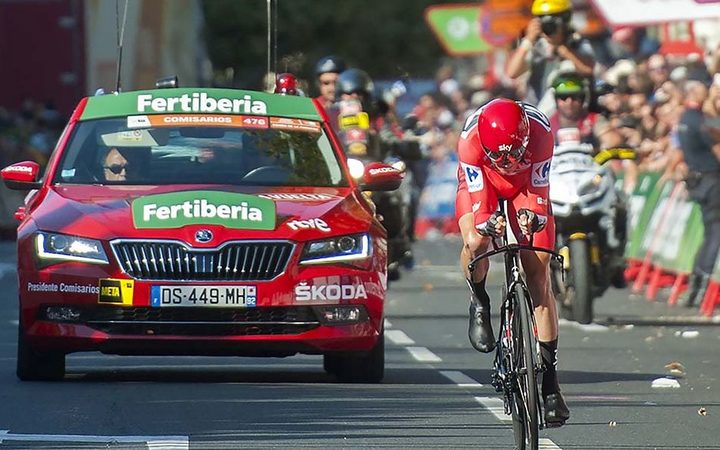 The Team Sky rider completed the 40.2-km run from Circuito de Navarra to Logrono in 47 minutes, adding 57 seconds to his lead over his main rival, Italy's Vincenzo Nibali, who is now 1:58 behind him.

Kelderman's reward for a fine performance was to move onto the podium in the overall classification, behind Froome and Nibali.

Briton Froome is bidding to become the first rider for 39 years to win the Tour de France and the Vuelta in the same season.

This display recalled Froome's sensational performance in the 2011 time trial at the Vuelta, where he stunned team leader Bradley Wiggins by taking the red jersey in Salamanca.

"I wasn't getting many time checks from the car so didn't really know where I was," Froome told reporters. "I actually thought it wasn't good news so I was worried halfway through.

"But coming into the last six or seven kilometres I found out I was on track for the stage, which was a big relief."

Team Sky general manager Dave Brailsford doesn't believe Froome has victory wrapped up yet, though, despite his convincing lead.

"It's so hard, the climbs are so steep and intense that you can never relax," he said. "We can tick that one off, turn the page and get back into the steep hills."

Italian Daniel Oss had set the early running but young German rider Lennard Kaemna beat his time before being usurped by Sweden's Tobias Ludvigsson, who lost his water bottle in the first 10km but still crossed the line in 48:07.23.

Veteran rider Alberto Contador, in the final time trial of his career, set a new lead time of 47:59.82, delighting his fans at Logrono and moving to fifth in the overall rankings, before Froome's resounding victory.