South Africa's rugby coach Allister Coetzee says the up-coming matches against the All Blacks and the Wallabies will test the Springbok's new found confidence. 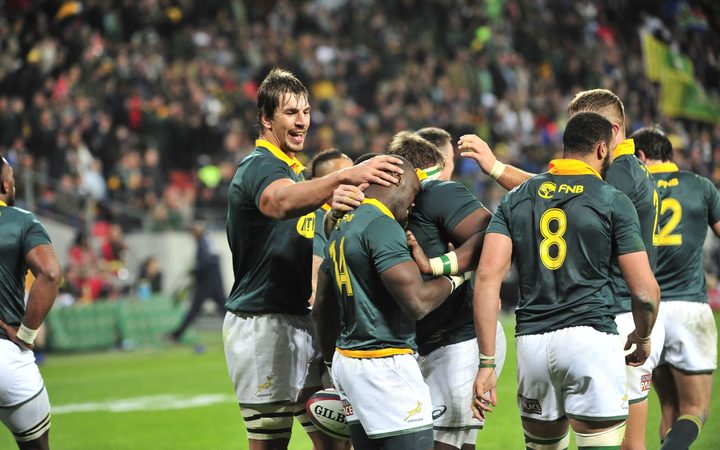 Springboks celebrate a try against the Pumas Photo: Photosport

The Springboks stretched their winning run in 2017 to five matches when they comprehensively beat Argentina 41-23 in Salta on Sunday in this year's southern hemisphere championship.

The wins, which follow a 3-0 test whitewash against France in June, contrast starkly to last year when the Springboks lost eight of 12 internationals and finished the year in turmoil.

"It's a different beast waiting that side of the Indian Ocean, it's always tough going down to Australia. They are hitting form as well," Coetzee said. 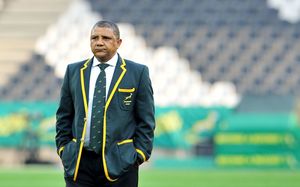 Springboks coach Allister Coetzee says it's always a big battle when they clash with the All Blacks, and tonight will be no different. Photo: Photosport

"They made a couple of mistakes in the first game against the All Blacks and were punished for that but you could see how they put New Zealand under pressure in the second test," he told reporters after his team's 30-hour journey home from Argentina.

"Always high ball in play when you go there, they are very clever with their set pieces, especially at the lineout and their mauling. So yes, it's going to be a massive challenge," Coetzee said of the September 9 game against Australia in Perth.

Australia were hammered 54-34 by the All Blacks in the first game of the Championship but a much improved performance in Saturday's return leg saw the Wallabies race to a 17-0 lead before they succumbed to a combination of poor kicking and a late All Blacks try.

The Springboks' coach said his side were working methodically on the areas of the game where they needed to improve, such as scrums, mauling and creating opportunities.

"I feel comfortable with the preparation we've had and taking that into match days means we always stand a chance," he said.

"We were delighted with the result in Salta, another step in the right direction. We were good in all areas of our game. We handled the physical game that the Argentines threw at us and our discipline was remarkable," said Coetzee.

The Springboks conceded just eight penalties in the two Pumas games, he said, and needed that level of discipline and work rate to prevail against the Wallabies and the All Blacks.

Coetzee said flyhalf Handre Pollard, scrumhalf Ross Cronje and utility back Dillyn Leyds would return to a 29-man squad for the Australia and New Zealand games.

Pollard was rested against Argentina to help with his conditioning and will be utilised in a versatile role, covering centre too, Coetzee said, adding that the player had made a huge improvement in his skill levels and team's game plan.