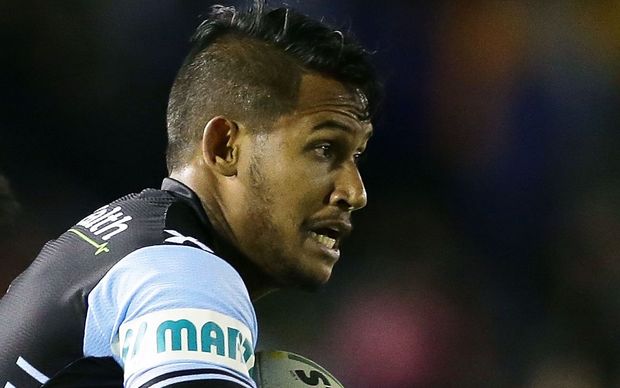 Barba had a hand in three tries, while Feki scored two himself including the match-sealing four-pointer in the 79th minute to take the Sharks back to the top of the NRL ladder.

But the second-last placed Roosters made them work hard for the win.

Rookie playmaker Connor Watson was the Roosters' best in his first run-on start, scoring a brilliant individual try in the first half and putting Dale Copley over in the second stanza.

The Roosters showed touches of the side that claimed the last three minor premierships, but made numerous simple errors the Sharks were professional enough to take advantage of.

That was illustrated best in the dying stages as the Roosters, trailing 26-20, pressed to tie up the scores, before a poor pass from Mitchell Pearce to Blake Ferguson was scooped up by Nu Brown who dished off to Feki to race 80m to secure the win.

The Tricolours were on the wrong end of a number controversial calls from the bunker, in particular a Daniel Tupou try which was turned down to an apparent lack of downward pressure.

But when it mattered most the Roosters' lack of composure cost them. They led early through a try to Mitchell Aubusson in the third minute, before Valentine Holmes responded three minutes later.

With the Roosters left-side defence struggling, Jack Bird scored the Sharks second try in the 19th minute, the visitors exploiting a 12-man Tricolours after Blake Ferguson was sinbinned in the 14th minute due to a professional foul.

Watson stepped past Chad Townsend and sprinted away to bring the Roosters level at 10-all in the 27th minute.

But it was the Sharks who finished the first half the stronger, Luke Lewis crossing untouched from a short ball from Townsend for Cronulla to lead 16-10 at the break.

The visitors' lead blew out to 26 points midway through the second half through Feki's first try in the 48th minute and a Chad Townsend 54th minute four-pointer.

The Roosters fought back to 26-20 on the back of tries to Copley and Tupou with nine minutes to play. But as they have done consistently through their winning streak the Sharks held firm at the death.