The bullocking winger Manu Vatuvei is set to return to the Warriors starting lineup after a month on the sidelines dealing with a range of personal issues.

Vatuvei is one six changes to the Warrior side for Saturday's match against the third placed Brisbane Broncos.

The 30-year-old 215 game veteran has had various personal problems after his involvement in the prescription pills and energy drinks scandal that beset the club and hasn't played the side's biggest loss of the season against Melbourne in April. 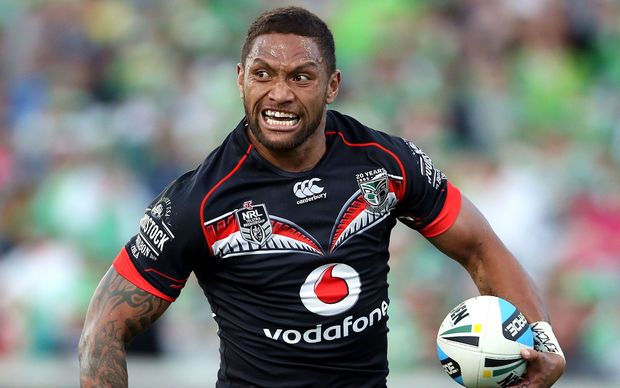 Manu Vatuvei on the burst for the Warriors. Photo: PHOTOSPORT

Apart from Vatuvei, centre Solomone Kata is back from a one-game suspension while hooker Nathaniel Roache and forwards Albert Vete, Charlie Gubb and Ligi Sao have all been recalled on a five-man bench.

Making way for the six players coming into the squad are Jonathan Wright, Matt Allwood, Jazz Tevaga, John Palavi and James Gavet plus 18th man Toafofoa Sipley who were all in New Plymouth for the recent loss to Canberra.

While third on the NRL ladder Brisbane come into the game with back-to-back-losses and three defeats in its last four outings.

The Broncos also have six players set to back up after playing for Queensland in the opening State of Origin match for Queensland.