Steven Adams' dream of making the NBA Finals will be decided this afternoon when the Oklahoma City Thunder play the Golden State Warriors in the deciding game seven of the Western Conference Finals in Oakland. 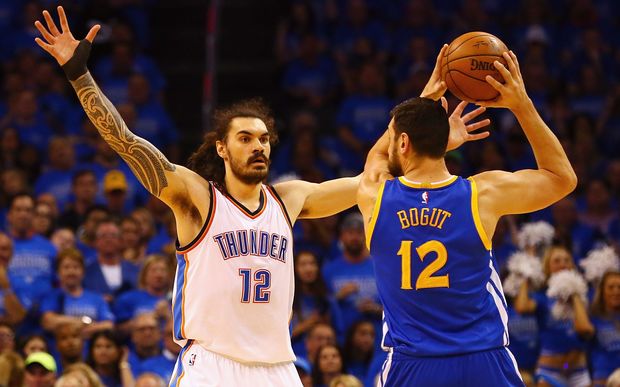 The Thunder had held a 3-1 lead in the series, but facing elimination, the defending champion Warriors came back with two impressive victories and are now favourites to close out the Western Conference title on home court.

The Warriors overcame a seven point deficit in the final minutes in game six in Oklahoma to steal the contest 108-101.

It evened the Western Conference Finals series 3-3, with the deciding game seven at the Warriors' home court tipping off at 1pm (NZ time).

Only nine teams have ever come back from 3-1 down to win a series and the Warriors' Australian centre Andrew Bogut believed Adams' Thunder must be demoralised.

"It's tough to have that lead and keep us at bay and then all of a sudden we go over the top by three and then six," Bogut said.

"I guess it's pretty demoralising."

Adams, described by American media this morning as "the carefree off the court, hard-nosed on the court New Zealand brute", disagreed.

"If you're asking about the spirit in our team, it's pretty good, bro," Adams told reporters.

"We are not depressed or sad or anything," Adams said.

"We are just ready for the game and excited by the opportunity."

In a sport where most players give quick, monotone, cliched answers at press conferences, Adams has become a favourite of US sports reporters.

They have fallen for his wit, humour, innocence and Kiwi back story.

Adams is the youngest of a family of 18 giant brothers and sisters.

His brothers have an average height of 206cm and sisters, including two-time Olympic gold medal-winning shot-putter Valerie Adams, stand around 183cm.

Money was tight growing up, but Adams' appetite meant he would eat six meat pies for a snack after school.

His performances in the playoffs, particularly outplaying Australian Bogut, have earned him the title of one of the best young centres in the NBA.

Asked about the formidable prospect of going into the hostile Warriors arena seeking a win to keep their season alive, Adams admitted he would prefer to be playing back in Oklahoma City.

"I like it at home because of the food there," Adams said, drawing laughter from the reporters around him. 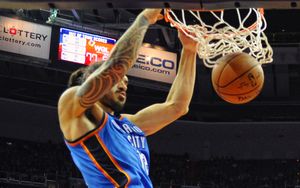 The Thunder's all-star forward Kevin Durant said they just had to go out there and have fun.

"It's a great opportunity to play at the highest level, one game to go to get to the finals. We like having that opportunity so we can't put too much pressure on ourselves. We've just got to go out there be relaxed, follow our game plan and play with passion and play as hard as we can and we like our chances."

The Warriors, despite all their apparent advantages, were not taking the Thunder for granted.

"Our job isn't done and we have a lot more work to do," Bogut said.

Today's winner will play the Cleveland Cavaliers in the NBA Finals, with game one on Friday.