In a reversal of fortunes to last year's final, the Hurricanes scored three tries to two in a match played in wet and difficult conditions.

The Highlanders dominated territory early on but were unable to convert that advantage into points.

The Hurricanes opened the scoring against the run of play with an almost length of the field try.

After thirteen minutes number eight Victor Vito burst off the back of the scrum and down the blindside wtih the ball passing through several sets of hands including winger Corey Jane, halfback T.J Perenara, flanker Brad Shields and finally openside Ardie Savea who scored under the posts. 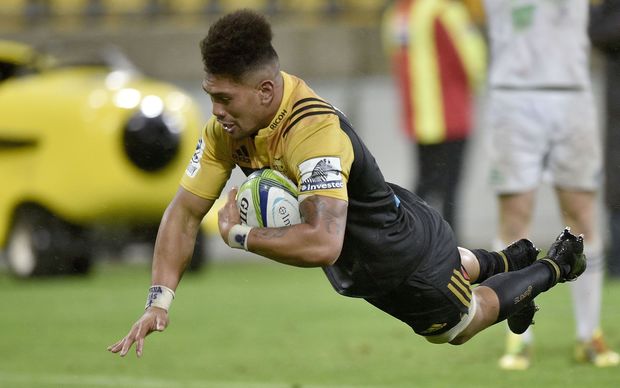 Ardie Savea scores the first of his two tries for the Hurricanes in their 27-20 win over the Highlanders. Photo: Photosport

The Hurricanes went 14-nil up when Brad Shields crossed ten minutes later but the Highlanders quickly hit back with a well constructed try off an attacking scrum to first five Lima Sopo'aga.

Sopo'aga then also added the extra two points with the conversion to make it 14-7.

A Beauden Barrett penalty just before half-time extended the Hurricanes lead to ten points, making it 17-7 at halftime.

Both sides looked to play more conservative wet weather rugby in the second half.

The Highlanders closed the gap to three points, just two minutes after the break gaining posession following the charge down of a T.J. Perenara kick.

After a series of rucks prop Daniel Lienart-Brown barged his way across to score and with Sopo'aga adding the conversion the score was 17-14.

The match became more of arm wrestle with the teams trading penalties.

The Highlanders levelled the score at 17-all before the Hurricanes edged the lead back out to three to 20-17.

Marty Banks who replaceed Sopo'aga then kicked a penalty to make it 20-all.

With time almost up the Hurricanes won a five metre scrum after initially driving over the Highlanders only to be held up.

From the resulting scrum Ardie Savea shrugged off three tacklers to burst over the line and break the deadlock to give the Hurricanes the win.

Look back over the scoreboard here: