New Zealander Frances Buckley has been promoted as Russell's No.1 mechanic with Bonnie Beard her assistant starting from the next race of the series in Darwin in mid-June.

It's the first time in Supercars history that a team's top two mechanics are women. 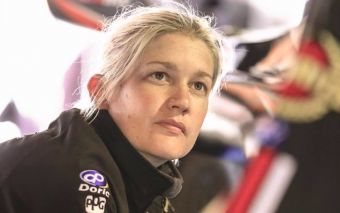 The key staff changes continue the strong contribution of females at Erebus.

Betty Klimenko became the first woman to own a team when Erebus entered the V8 category in 2013 while Janelle Navarro was the sport's first female mechanic when she was appointed the following year.

"We have two wonderful people filling these roles," Klimenko said.

"The fact they are both women is a coincidence."

The 33-year-old Buckley has worked for several other V8 outfits and joined Erebus as No.2 mechanic earlier this year.

Buckley said when she first decided to become a mechanic and sought an apprenticeship she found it difficult to find a job.

"No one wanted to take me on," she said.

"When I first started doing motorsport you get funny looks, but now if I don't turn up to a race meeting they wonder where I am."

She was recruited by Erebus over the off-season as it underwent a wholesale change of staff while moving from Queensland to Melbourne.

"It's been a quick learning curve for the whole team after we came together fairly late before the season and I'm very appreciative of the opportunity to take over the number 1 mechanic role," she said.