Italian cyclist Diego Ulissi claimed his second stage win of this year's Giro d'Italia as Bob Jungels maintained his grip on the leaders' pink jersey on the 227km ride from Modena to Asolo. 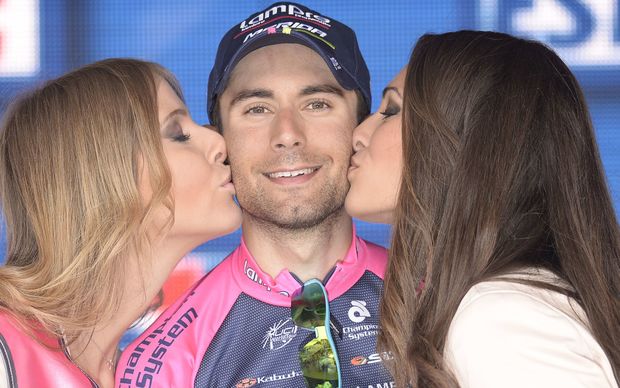 Ulissi (Lampre-Merida) outsprinted GC contenders Jungels and Andrey Amador after the trio had broken away near the end of a largely flat 11th stage.

Amador crossed the line second to claim a six-second time bonus to the four of Luxembourg's Jungels who leads the overall standings by 24 seconds with half the race completed.

Significantly, however, some of the other pre-race favourites lost time, trailing in the chasing bunch that finished 13 seconds behind the leading trio.

Italian Vincenzo Nibali and Alejandro Valverde both tried to attack the peloton with little more than 10km remaining but were caught as Jungels, producing a masterful ride, took it on.

For the second day running the race lost one of its GC favourites when Dutchman Tom Dumoulin, who wore the pink jersey for three stages, quit with saddle sores.

"Unfortunately, Tom has been forced to abandon the Giro due to saddle sores," his Giant Alpecin team said on Twitter.

Spaniard Mikel Landa of Team Sky abandoned on Tuesday because of illness.

Etixx-Quick-Step rider Jungels will try to protect his lead on Thursday's 182km stage which should suit the sprinters.

"All the sprinters stages haven't really been true sprinters' stages," Jungels said of the stage which featured some short, sharp climbs near the end.

"It was a shame Ulissi came across because I thought I could get the stage win."