Football's world governing body FIFA has named a woman with no previous experience in football administration as its second-most powerful official as it attempts to move on from a major corruption scandal.

Fatma Samba Diouf Samoura, currently the United Nations Development Programme Resident Representative in Nigeria, was named as secretary-general and will be responsible for the day-to-day running of the federation.

"FIFA is taking a fresh approach to its work -- and I am eager to play a role in making that approach as effective and lasting as possible," she said in a FIFA statement.

Samoura's appointment was announced by FIFA president Gianni Infantino, hosting his first Congress since he was elected in February to lead the scandal-plagued federation out of crisis.

"Fatma is a woman with international experience and vision who has worked on some of the most challenging issues of our time," Infantino said in a statement. 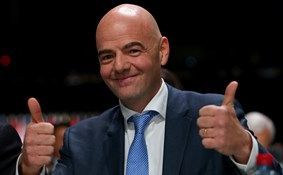 "Importantly for FIFA, she also understands that transparency and accountability are at the heart of any well-run and responsible organisation."

FIFA's Congress also voted to accept Kosovo and Gibraltar as its 210th and 211th members. It has previously said that both could be allowed into the 2018 World Cup qualifying competition.

The Congress was the first since FIFA passed a raft of reforms aimed at avoiding a repeat of the corruption scandal that has seen 42 soccer officials and entities indicted in the United States.

Infantino told the Congress FIFA would show "no mercy" to any federation that misused money allocated to it for football development. "Don't betray us, use it for football," he said.

Samoura, who is 52 and from Senegal, replaces Frenchman Jerome Valcke, who was fired in January and has since been banned for 12 years for ethics violations which included using FIFA expenses for sightseeing trips and destruction of evidence.

Samoura began her United Nations career with the World Food Programme in Rome in 1995 and has served as country representative or director in six African countries.

Infantino said the FIFA Council had agreed to end Indonesia's nearly one-year-long suspension from international football, imposed because of government interference in the country's football federation.

The Congress voted to continue the suspensions of Kuwait and Benin over the same principle. FIFA's statutes demand that national football associations are completely independent of their country's governments.