Liverpool have added another fairytale comeback to their history books, fighting back from 3-1 down against Germany's Borussia Dortmund.

The side has now reached the Europa League semi-finals, after Dejan Lovren's stoppage-time winner secured them a 4-3 win at Anfield. 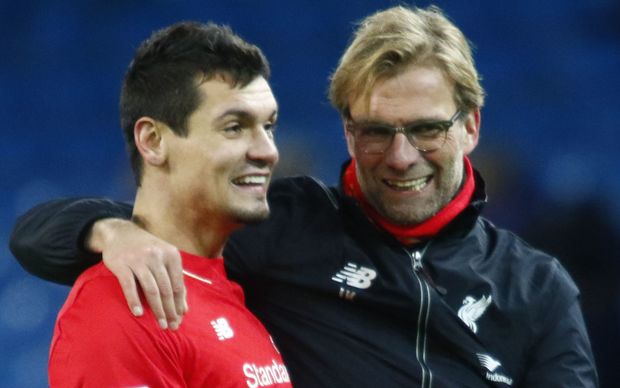 Lovren rose at the far post to head home in the first minute of added time, recalling memories of the English club's 2005 Champions League final comeback against AC Milan and propelling them into the last four with a 5-4 aggregate victory.

Liverpool will be joined in Saturday's draw by Villarreal, who beat Sparta Prague 4-2 and 6-3 - once away, once at home - and Shakhtar Donetsk, who won 4-0 at home to Braga to complete a 6-1 aggregate triumph.

Liverpool's victory at Anfield was greeted by typically exuberant celebrations from manager Juergen Klopp, who spent seven years at Dortmund and would have been no stranger to the quick-fire counter attacks that earned the visitors a 2-0 lead.

Henrikh Mkhitaryan and Pierre-Emerick Aubameyang had seemingly given Dortmund an unassailable advantage, before Liverpool gained a foothold when Divock Origi poked home early in the second half.

Their spirits were swiftly dampened, however, when Marco Reus made it 3-1 after 57 minutes, before hope was restored through Philippe Coutinho's curling effort.

The Anfield roar then went into overdrive when Mamadou Sakho levelled with 12 minutes remaining and the final blow was delivered when Lovren rose to head James Milner's cross into the net.

"Sport is about winning and we did not make it. You have to accept it and be an honourable loser so congratulations to Liverpool. You have to take defeat like a champion," dejected Dortmund coach Thomas Tuchel said.

It was a game reminiscent of Liverpool's Euro glory days in the 1970s, and it was a special triumph for Klopp, who left Dortmund 10 months ago after a highly successful spell.

"It's a great night not to forget," the delighted coach said. "We fought back like devils and it is deserved - a little bit lucky, maybe."