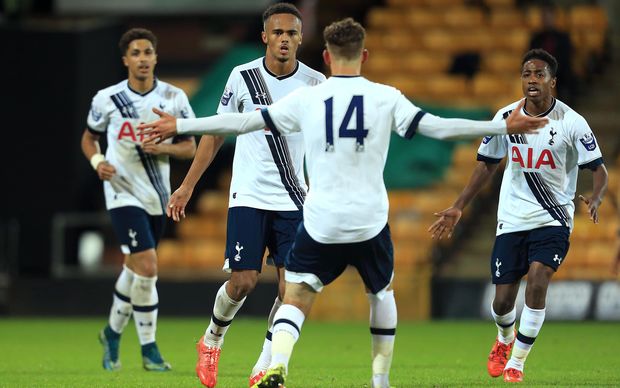 Goals from Dele Alli, Toby Alderweireld and Erik Lamela earned them a first home league win over United since 2001.

After a flat first half in which Lamela missed an open goal, Spurs broke the deadlock after 70 minutes when Alli fired home Christian Eriksen's low cross.

Alderweireld rose to head in Lamela's free kick four minutes later and Lamela swept in a third for a rampant home side who remain the only possible threat to Leicester City's march towards the title.

Fifth-placed United managed only one shot on target as their hopes of a Champions League spot suffered a severe blow.

Earlier Leicester had moved 10 points clear with a 2-nil win at relegation-threatened Sunderland.

England international Jamie Vardy put them ahead in the 66th minute and he added his second - and 21st of the season - in added time.

Also this morning Liverpool romped to a 4-1 win over Stoke City, despite manager Juergen Klopp resting a number of players ahead of Thursday's second leg of the Europa League quarter-final against his former club Borussia Dortmund.

The victory sent Liverpool above Stoke into eighth position, one point ahead of them but nine short of the Champions League places.