The Southern Steel and the Mainland Tactix have played out a 58-all draw in their trans-Tasman netball match at Invercargill. 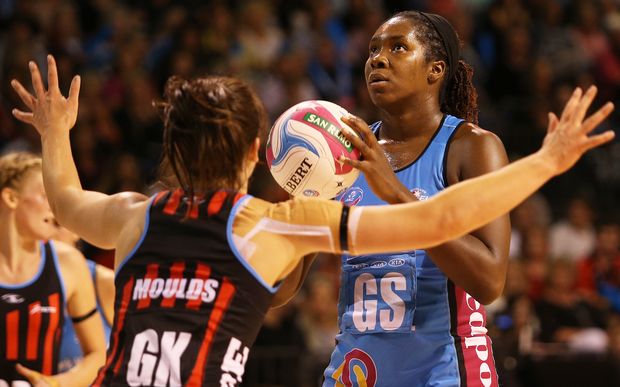 Jhaniele Fowler-Reid of the Steel lines up a goal against the Tactix. Photo: PHOTOSPORT

The Tactix led 13-11 after the first quarter at Southland Stadium and maintained their two goal advantage at half-time.

With towering shooter Jhaniele Fowler-Reid anchoring the Steel circle and the movement and aerial ability of the Tactix shooters Bailey Mes and Mwai Kumwenda, the high bomb featured prominently in an entertaining contest.

Winning the turnover battle and subsequently getting more ball into the hands of Fowler-Reid helped the Steel make a decisive move during the all-important third stanza.

The Jamaican import left her mark with a succession of goals while defenders Jane Watson, Te Huinga Reo-Selby-Rickit and durable captain Wendy Frew secured a number of important steals that gave the Steel a four-goal lead going into the final quarter.

But the Tactix showed their fighting spirit to quickly level up, leaving a thrilling goal-for-goal run to the line for the remaining nine minutes until they drew the match with the final goal in the game.

Fowler-Reid, top scored with 50 goals from 56 attempts, while the Magic's Malawian goal shoot, Kumwenda, netted 35 from 38.

Her team mate the Silver Fern, Bailey Mes, scored 22 from 30.