The offices of European football's governing body have been searched by Swiss police after ex-secretary general Gianni Infantino was named in papers leaked from a Panamanian law firm. 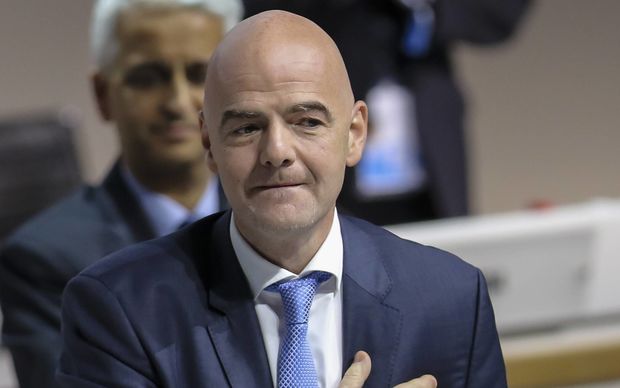 While working for Uefa, Infantino co-signed a television rights deal in 2006 with two businessmen who have since been accused by the FBI of bribery.

Uefa said it was giving police all relevant documents in its possession.

Cross Trading - owned by Hugo Jinkis and his son, Mariano - bought TV rights for Uefa Champions League football in 2006 for $163,000 and immediately sold them on to Ecuadorian TV broadcaster Teleamazonas for $456,000.

The contract came to light after 11 million documents were leaked from Mossack Fonseca.

A statement from Switzerland's Office of the Attorney General (OAG) said a "co-operative search" took place "for the purpose of securing evidence".

It said its criminal proceedings were connected to the acquisition of television rights and were "directed against persons unknown, meaning that for the time being, no specific individual is being targeted".

It added: "The suspicion is based on the result of findings that have emerged from other proceedings, as well as the corresponding financial analyses carried out by the OAG."

Uefa initially denied doing business with any of the 14 people who have been indicted by the FBI in its investigation into corruption in world football.

It has now told the BBC the TV rights were sold to the highest bidder in an open and competitive tender process.

It also stressed it has been "conducting a review of its various commercial contracts" following the US indictments in May 2015.

Uefa also backed Infantino, who left the organisation after being elected Fifa president on 26 February, describing him as "an outstanding member of Uefa staff for many years" and "a man who has always acted with complete professionalism and integrity".

A senior Fifa source has told the BBC the 2006 deal should be examined by the governing body's ethics committee in the interests of transparency.

There is no evidence to suggest Infantino - then Uefa's director of legal services - received a bribe relating to the contract with Cross Trading, and no suggestion Teleamazonas was in any way complicit in any wrongdoing.

Cross Trading also has links to Juan Pedro Damiani, a member of Fifa's ethics committee who has already been placed under internal investigation.