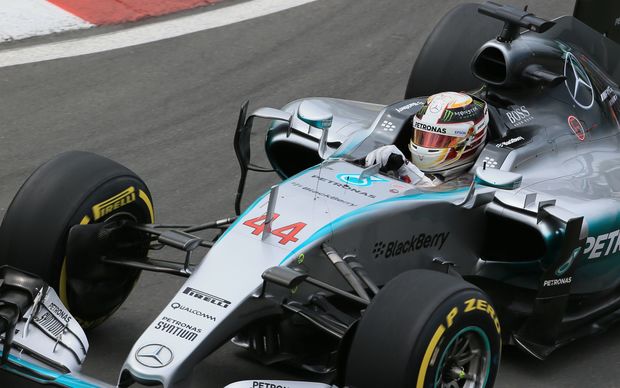 The Briton's lap of one minute 29.493 seconds was the fastest ever at the Sakhir track, beating the previous best of 1:29.527 set by Australian Mark Webber in 2005 practice during the V10 era.

Ferrari's four-times champion Sebastian Vettel and Kimi Raikkonen qualified third and fourth for the second race of the season.

The much-criticised new qualifying format was again in the spotlight, still underwhelming even if the outcome was marginally more exciting than the disappointing debut at the Australian season-opener two weeks earlier.

The pole was still decided with minutes to spare, with periods without cars on track and drivers eliminated as they sat in the pits.

Hamilton is chasing his third successive Bahrain Grand Prix victory on Sunday while Rosberg, the winner in Melbourne, is seeking a fifth win in a row after ending last season with three straight victories.

"It's not been a smooth sailing weekend in terms of pace," commented Hamilton, who was slower than Rosberg in practice and made a mistake on his first quick lap of the final qualifying session when he ran wide.

"I was generally struggling to put laps together and luckily the lap I did put together was the last one. The car felt great. It's incredible to think we are quicker than the V10 days. It shows how far the technology has come."

The V6 turbo hybrid cars have been lapping comfortably quicker than last year since Friday's first practice session, but hopes that Ferrari might break the Mercedes stranglehold proved unfounded.

"Step by step we're getting there. We know what to do, so we'll see. It's a long race and let's see what happens tomorrow," said Vettel, who had been fastest in yesterday's final practice.

Mercedes have now locked out the front row for eight races in a row and won the last seven.

It was Hamilton's second consecutive pole but the winner in Bahrain has started on pole only five times out of 11 races to date.

"My lap felt good and I was sure I was on pole," said Rosberg, who made his Formula One debut in Bahrain a decade ago. "Lewis put in an incredible lap to beat me. This track is where pole counts least I think so there are still a lot of opportunities."

Further back, Belgian Stoffel Vandoorne -- standing in for the injured Fernando Alonso -- beat McLaren team mate Jenson Button on his qualifying debut. The rookie will start 12th and the 2009 world champion 14th.

"I felt really confident in the car. I think we maximised our chances," said Vandoorne. "To out-qualify Jenson is a little bit of a surprise."

German rookie Pascal Wehrlein also stood out under the floodlights, qualifying his Manor in 16th place and ahead of both Saubers, both Renaults and a Force India.