Swimmers Lauren Boyle and Emma Robinson both went under the qualifying time for this year's Rio Olympics 800m freestyle event on the opening night of New Zealand Championships in Auckland. 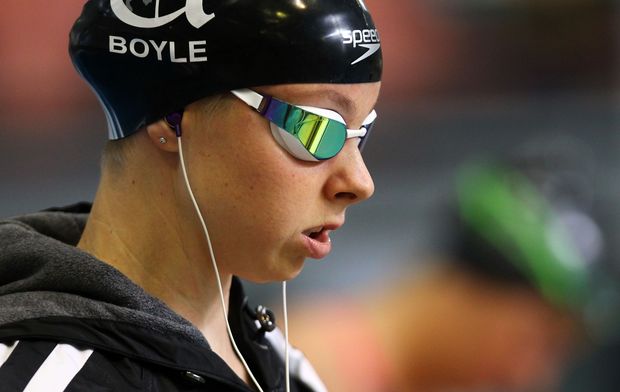 Boyle finished in 8:25.00, the fourth fastest time in the world this year, to easily qualify, and help drag Robinson through as she did last year for the world championships.

Robinson, who trains on the Gold Coast like Boyle, was timed at 8:31.27, a personal best, to be nearly three seconds under the qualifying mark.

"I thought I had the form I needed but worried because I had not swum that time since last year. I had a bump being really sick at worlds so this is a nice confidence booster," Robinson said.

"I tried to sit on Lauren's feet for the longest time that I could. I knew I had to give it all in that last 100m and my legs were gone by that stage but this is great."

Boyle was in command throughout going through the 400m in 4:09.36 on the way to her best time this year and ticking the qualifying box.

"I am really happy to have qualified and on the first day so good that we have got that done," Boyle said.

While she wanted a competitive time, Boyle was also keen to help Robinson to the qualifying time.

"I tried to go out strong and maintain it. I really wanted Emma to qualify. She is such a good training partner and works so hard so good to see her improving every year and getting closer to me which is great.

"I've tapered for this. It's not guaranteed that you will qualify so it's great to have qualified but it's also important to post a fast time some point this year."

Robinson is back in the pool today in the 200m freestyle while Boyle will set herself for the 400m freestyle later in the week.

Twenty-one year old Helena Gasson could not repeat her heroics from the morning in her bid to go under the qualifying mark in the women's 200m butterfly.

In the morning the North Shore swimmer lowered her own national record by more than a second with an excellent swim in 2:09.84, which was only half a second outside the Olympic qualifying mark.

Gasson pushed hard to better that in the night swim, overtaken on the final length by Commonwealth Games representative Samantha Lee who went on to win in 2:11.21.

While outside his national record, it was a strong performance as he builds towards his Olympic qualifying swim in the 1500m freestyle later in the meet.

In Para-Swimming this evening, four swimmers went under the target times for nomination to the selectors for the Rio 2016 Paralympics .

Te Awamutu's Nikita Howarth edged under the qualifying mark by 0.3 seconds in a time of 1:29.37 in the women's 100m breaststroke.