An injury to standout Corey Oates soured Brisbane's 25-10 NRL second round win over a the Warriors on Friday night at Suncorp Stadium. 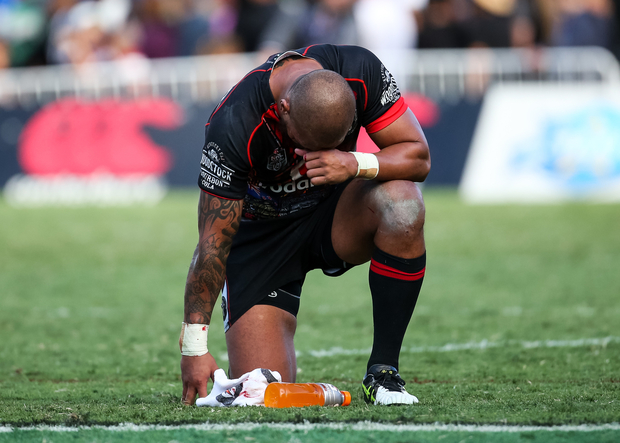 Oates showed why he was considered a State of Origin chance this year with a stellar display before suffering a suspected dislocated shoulder in the 71st minute.

The towering winger racked up 152m and crossed for a first-half try to put his hand up early for a Queensland call-up in front of 34,520 fans.

But it remains to be seen if his Origin dream remains alive after trudging off late in the clash clutching his shoulder.

The unbeaten Broncos ran in four tries to one against a Warriors side who did their best to rectify last round's first-half capitulation, only to fade out in the second stanza.

It is another blow for Warriors coach Andrew McFadden who had gone into the clash under enormous pressure.

Former coach Graham Lowe was the most-vocal critic of their first-round loss to the lowly Wests Tigers, claiming the Warriors lacked a hard edge due to their "bro culture".

And it seems there won't be any let-up any time soon, with the Warriors slumping to their 10th straight loss stretching back to the second half of last season.

Brisbane led 12-10 at halftime after scoring two tries to one thanks to an inspirational hand from Oates.

Already earmarked for Origin, Oates showed the grit needed to earn a Queensland jersey when he twice ran the ball out of the in-goal line under heavy traffic.

The winger also showed he had the flair, finishing off an Anthony Milford blindside play to score in the eighth minute.

The Warriors wilted in the second half as the hosts laid on two more tries plus a rare penalty kick.

With two minutes left, the Warriors let the scrum shot clock expire to gift Milford a kick right in front.

In another worry for McFadden, Warriors winger Manu Vatuvei was helped off in the 47th minute with a suspected rib complaint, while centre Blake Ayshford suffered a first-half concussion.