The Queensland Reds have sacked coach Richard Graham after the 2011 Super Rugby champions opened the new season with successive defeats.

Patience with the underperforming coach finally ran out with the 43 year old to be replaced on an interim basis by assistant coaches Matt O'Connor and Nick Stiles after just nine wins in his 34 matches in charge over three seasons.

The final straw came when the Reds, having lost 30-10 to the New South Wales Waratahs in their season-opener, lost 22-6 to Western Force on Saturday. 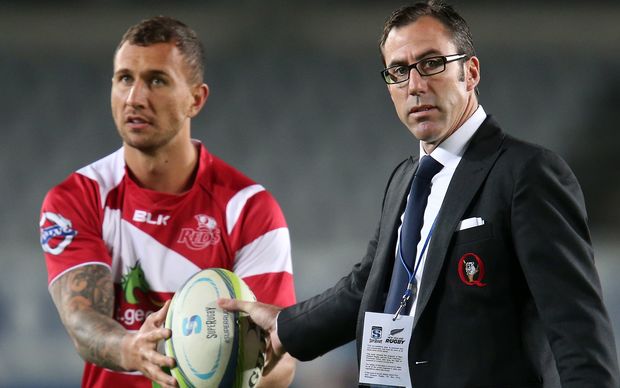 "I loved my role with the Reds. I am in a high-performance environment and the results haven't been to a satisfactory standard. I have to accept that and move on."

The Reds said they would commence a "worldwide process" to find a head coach for the 2017 season and both O'Connor and Stiles would be invited to apply.

Attack coach O'Connor, 45, helped Leicester to the English Premiership title in 2013 and coached Irish province Leinster to the Pro-12 crown in 2013-14 before being sacked the following season.

Stiles is a former Wallabies prop who has led Brisbane City to the National Rugby Championship title in the first two seasons of the competition.

The 42-year-old was in charge of the forwards under Graham, the only part of the side which has functioned well over the last two lamentable seasons.

Graham, who arrived at the Reds from the Force to work under Ewen McKenzie in 2012, had to re-apply for his job at the end of last season and there was widespread shock when he was successful.

The writing was on the wall for the former Queensland fullback, however, when his main advocate on the board, chairman Rod McCall, stepped down for personal reasons last month.

McCall's replacement, Damien Frawley, said he thought the "high performance" review of the Queensland Rugby Union (QRU) he oversaw last year had put in place the structures that would lay the foundation for future success.

The board will take part of the blame for the current shambles at the Reds, however, not least for reappointing Graham after the review.

There are also big question marks over a retention and recruitment policy that saw stalwarts of the 2011 title-winning side like James Horwill, Quade Cooper and Will Genia depart.

The high profile recruitment of Wallabies back James O'Connor, who left midway through his contract last year, and code-hopper Karmichael Hunt have not been overwhelming successes.

With the crowds at Lang Park having dropped to half of the levels the Reds enjoyed under McKenzie in 2010-13, Queensland rugby fans will be hoping for a major revival in 2017 when Wallabies skipper Stephen Moore joins from the Brumbies.