Lydia Ko could not really ask for much more after climbing to the top of the world golf rankings and claiming her first major last year, yet the New Zealand teen is keen to pack a bigger punch off the tee to improve her already formidable skills. 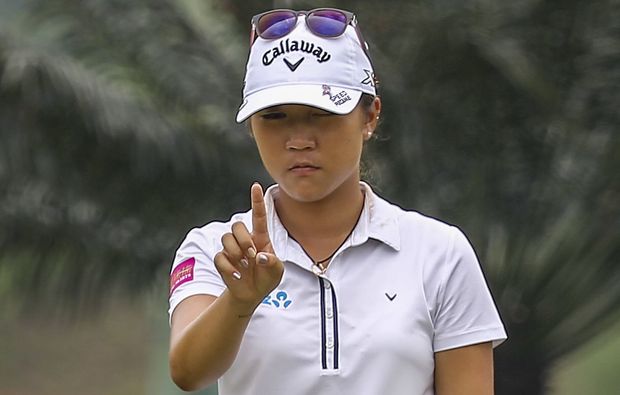 Ko has won 15 professional tournaments with a game built around accuracy and consistency but the 18-year-old is still awe-struck by the power some of her playing partners generate with the driver, a potential she is desperate to harness.

"I've never been a long hitter so I don't know what it feels like to be way in front unless I'm playing with juniors or Pro-Am partners," Ko told reporters on the eve of the HSBC Women's Champions event in Singapore.

"It's obviously really cool to play alongside players like Lexi Thompson... who hits the ball a really long way," she added of the big-hitting American, who climbed to number three in the world rankings with a six-shot victory in Thailand last week.

"You know especially with Lexi, she's hitting it long and pretty straight, you can see it by her results from last year and all that. It's really cool. You kind of stand back and go, 'wow'.

"Just even the swing speed or the sound it makes, you kind of put yourself outside of the ropes and admire it. That's their game. I wish I could hit it as long as Lexi but unfortunately I can't right now. Maybe with some illegal clubs or something."

Ko feels she has added a few yards off the tee this season with the help of her coaches and club supplier but is not yet ready to sacrifice accuracy for power.

"I think at the end of the day, consistency is really important. There are obviously a lot of aspects that go into playing good, and obviously I wish I could hit it like Lexi but it's kind of out of my bags," she added.

Ko finished second in Singapore a year ago after a final round showdown with world number two Park In-bee and the Kiwi expects her nearest rival in the rankings to be just as tough to beat on the demanding Serapong Course layout this time around.

"In-bee obviously played it perfectly last year, bogey-free, 72 holes. If you're bogey-free for 18 holes, you'd be happy but 72 holes, that's pretty impressive. So she kind of set the benchmark. You try and have to work off that," Ko added.