Manchester City guaranteed manager Manuel Pellegrini some silverware in his last season in charge with a penalty shootout win over Liverpool in the League Cup final at Wembley. 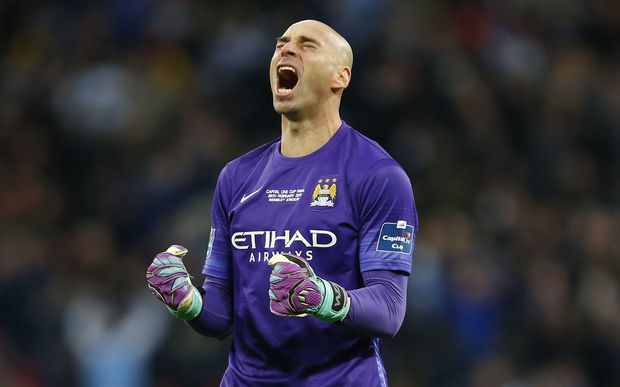 Earlier the game finished 1-1 with Fernandinho giving City the lead after 49 minutes when his shot slipped through keeper Simon Mignolet's grasp but Coutinho levelled with seven minutes to go from a rebound.

Mignolet and Caballero made vital saves in extra time but City clinched the season's first trophy in dramatic fashion to give Pellegrini his second League Cup, having also lifted it two years ago as well as the Premier League title.

Once the now familiar pre-match razzamatazz of pyrotechics and national anthem was concluded, the final failed to ignite in a first half low on quality.

Liverpool were assured in possession without having much cutting edge and it was counter-attcking City who came closest to scoring after 22 minutes when Sergio Aguero's shot was touched against the post by Mignolet.

Aguero had led Liverpool centre back Mamadou Sakho a merry dance in the build-up, the Frenchman still dizzy after an earlier clash of heads with team mate Emre Can that eventually forced him off to be replaced by Kolo Toure.

The second period was action-packed and it was four minutes old when the deadlock was broken in a moment Mignolet will want to forget.