Kangaroos star Johnathan Thurston has inspired North Queensland to a second-half romp as they secured rugby league's World Club Challenge with a 38-4 victory over Leeds in a spiteful clash. 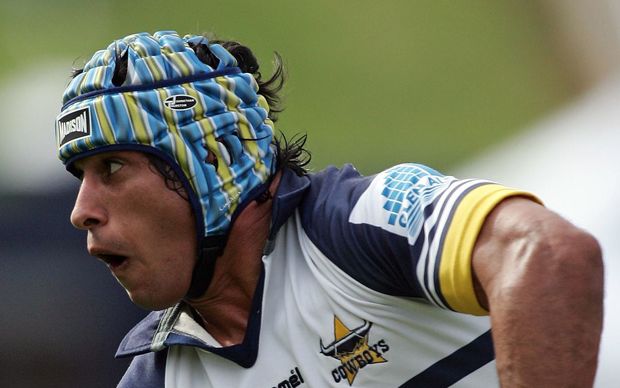 In a fiery finish to the match, both teams finished with 12 men after a brawl in which Leeds prop Mitch Garbutt was sent off for a vicious punch to the face of Cowboys prop James Tamou.

Tamou, who was sin-binned for slapping a Leeds player in the lead-up to the scuffle, left the field with blood pouring from his nose.

The Cowboys ran in six second-half tries in which Thurston had a hand in three tries and scored one of his own to cement his place as the premier player on the planet.

Back-to-back thrashings by Brisbane and Sydney Roosters had already delivered the World Club Series to Australia for a second consecutive year, and Paul Green's Cowboys this morning secured the clean sweep.

Heavy underdogs Leeds, buoyed by a 19,778-strong home crowd on a bitterly cold and blustery night at Headingley Stadium, started promisingly but their failure to convert pressure into points proved costly.

Thurston made them pay when he put halves partner Michael Morgan into space - with the impressive No.6 crossing out wide to open the scoring in the 22nd minute.

Leeds hit back quickly through diminutive halfback Rob Burrow, who sneaked over to level the score at 4-4, which they took into halftime.

But the Cowboys roared into life after the break, firstly taking advantage of a spilled bomb by Leeds' winger Ash Handley just 90 seconds in, with Kane Linnett feasting on the scraps to score a converted try out wide to reclaim the lead for the visitors.

Seven minutes later, they made the most of repeat sets in the red zone with winger Kyle Feldt accepting a long ball from Morgan before spectacularly fending off England winger Ryan Hall to score in the corner and extend the lead to 10.

Lachlan Coote virtually put the game beyond doubt with 18 minutes remaining when he scored a controversial try having latched onto a Thurston grubber.

The fullback fumbled and regathered the Thurston kick, but was ruled by the video referee to have not knocked on before grounding - much to the ire of the partisan home crowd.

Two minutes later, Thurston put the final nail in Leeds' coffin - shrugging off a defender before stumbling over the trying - with the score blowing out to 26-4 with his conversion.

With the floodgates well and truly open, Cowboys centre Justin O'Neill stepped through some lacklustre defence to rub salt into open wounds as the Leeds faithful streamed out of the stands.

O'Neill ran in a second when he finished off a lovely team try after Winterstein and Morgan exchanged passes following a midfield Jake Granville bomb.