The Black Caps will wear black armbands today to mark the fifth anniversary of the 2011 Christchurch earthquake, as they seek to end Australia's ascendancy in the second test at Hagley Oval. 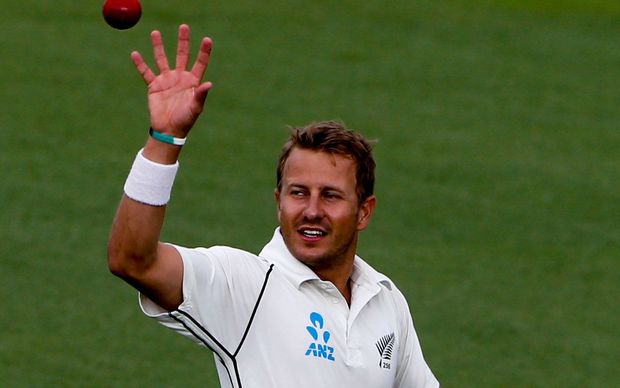 A minutes silence will also be held during the lunch break at 12:51pm, the same time of day that the 2011 quake hit.

Two late wickets salvaged the day for the New Zealand cricketers on day two yesterday but pace bowler Neil Wagner knows another long day in the field is in store if they can't make further in-roads into the Australian batting line-up.

Australia will resume at 363 for four this morning, seven runs in arrears of New Zealand's first innings total of 370 but with six wickets in hand.

It could have been much worse for the Black Caps with the tourists 356 for two with just sevens overs remaining.

However in the space of a few balls Wagner snared the valuable wickets of captain Steve Smith and Joe Burns who scored 138 and 170 respectively.

Wagner says for the Black Caps the removal of the first test double century maker Adam Voges is now crucial.

"Two wickets at the end helped us and quite crucial and I guess quite a bit of luck for us that we'd been trying to get all day and obviously got us back into a bit of a better position.

"But obviously we still have six wickets to get and there's still a long way and a lot of hard work for us to do and we've got to focus on making that happen."

The seamer concedes the hosts on the back foot but Wagner is backing their bowlers to be innovative and attacking on day three.

"Hopefully if you keep executing well you're going to get some sort of luck or some sort of assistance somewhere.