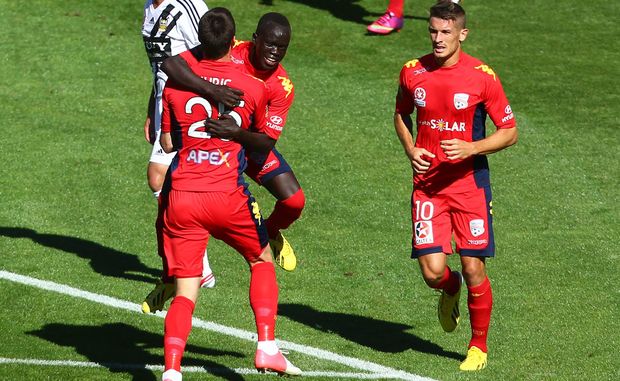 Sydney twice came from behind in a first-half goal-fest with the Reds' Sergio Cirio netting twice as neither side was able to find the winner in a much tighter second half.

With one eye on Tuesday night's Asian Champions League playoff match against Shandong Luneng, United's Marcelo Carrusca, Bruce Djite and Jordan Elsey were relegated to the bench while Craig Goodwin was left out of the squad.

Cirio was given his first start for United since returning from injury and Sydney's star recruit David Carney earned a place on the bench and was brought on for the final 20 minutes.

United stunned the 11,785 spectators with a goal in the third minute, courtesy of a ricochet from Cirio.

In his first start for the Reds, Stefan Mauk whipped in a cross deep into the Sydney penalty area, only for Seb Ryall to clear the ball straight into the legs of Cirio, sending it past keeper Vedran Janjetovic.

Isaias almost made it 2-0 just after the quarter hour but his 25-metre free-kick smashed onto the cross bar with Janjetovic beaten.

Sydney responded and dominated for the rest of the first half and were rewarded with an equaliser on 37 minutes.

Filip Holosko delivered an inch-perfect cross for Matt Simon whose glancing header nestled into the bottom corner of the net.

The visitors remained in control before Cirio helped United retake the lead with his second on the stroke of half-time.

After a good run from Bruce Kamau, the little Spaniard took a touch and shoot from just inside the area with Janjetovic only able to get his finger tips to the low drive.

But, there was to be more late drama before the break as Holosko made the most of some sloppy United defending to equalise three minutes into first-half stoppage time.

Milos Ninkovic dinked a delightful ball over the Reds' defence and Elsey's attempted clearance only assisted Holosko who made no mistake from close range after the ball sat up nicely.

Sydney did most of the attacking in the second half with Holosko and Simon looking the most dangerous, although the pair was largely restricted to half chances.

Simon nearly gave the Sky Blues the lead on 75 minutes with another powerful header after a teasing corner but his effort was just wide.