A venomous spell of fast bowling from Stuart Broad led England to an emphatic seven-wicket win over South Africa in the third Test in Johannesburg to clinch the series. 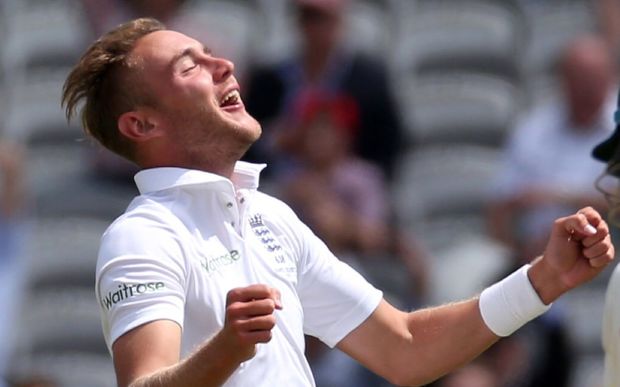 Broad's brilliant return of six for 17 on a lively wicket helped skittle the Proteas for 83 in their second innings on the third day.

England reached their modest victory target of 74 with relative ease as captain Alastair Cook (43) top-scored in guiding them to 77 for three from 22.4 overs under gloomy skies.

The tourists now have an unassailable 2-0 lead in the four-match series, with the final game to be played in Pretoria.

"Jimmy Anderson and Stuart Broad were exceptional as a partnership, it's a privilege to captain those two. It's one of those days we will look back on for a long time," Cook said at the presentation ceremony.

"It's been a great tour, to come out here and beat South Africa in two test matches. There is more to come though, we should never be satisfied."

South Africa bowled out England for 323 in the morning session for a slender first-innings deficit of 10 runs, but were no match for the bounce and movement of a rampant Broad.

After removing openers Dean Elgar (15) and Stiaan van Zyl (11), Broad grabbed the key wicket of captain AB de Villiers (0) when he induced an inside edge to wicketkeeper Jonny Bairstow.

Hashim Amla (five) then clipped the ball to James Taylor at short-leg, who showed excellent reactions to take a low catch, before Temba Bavuma was bowled for a duck.

Broad's brilliant day was complete when he ended the innings with an excellent catch off his own bowling to dismiss Faf du Plessis (14) for match figures of eight for 99.

Ben Stokes grabbed two scalps and there were also wickets for Anderson and Steven Finn. The latter has complained of tightness on his left-side and will be assessed on Sunday.

"They bowled exceptionally well, I haven't seen a team bowl that well in a long time," De Villiers said.

"The team will be motivated to finish the series on a high. There are not a lot of issues with the squad, we just need to play better cricket."

Rabada, 20, had earlier claimed his first five-wicket haul in test cricket when he bagged 5-78 to limit England to 323.

It was a first home series defeat for South Africa against a team other than Australia since England won 2-1 in 2004-05.