India's Rohit Sharma scored a second successive century but could not stop Australia from winning the second one-dayer by seven wickets in Brisbane. 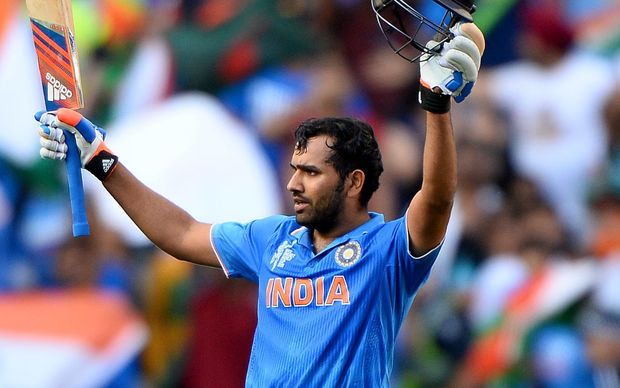 For the second time in three days, India rode Rohit's elegant century to post a 300-plus total before watching George Bailey help the hosts mount a clinical chase to put Australia 2-0 up in the five-match series.

Rohit showed the kind of form he is in, hitting a sparkling 124 and featuring in century stands with test skipper Virat Kohli (59) and the selfless Ajinkya Rahane (89) to help India post 308-8.

Yet, the satisfaction of a team victory eluded him as Bailey (76 not out) saw Australia home after Aaron Finch and Shaun Marsh had given the hosts a 145-run opening stand.

Mahendra Singh Dhoni opted to bat after winning his second toss of the series and opener Shikhar Dhawan again fell cheaply to pace with Joel Paris claiming his first ODI wicket in his second match.

Rohit and Kohli were once more left to rebuild the innings, which they did with some elegant shot-making.

The duo, who had forged a 207-run stand in India's five-wicket defeat in game one at the WACA, added 125 before Kohli paid the price for attempting to steal a non-existent second run.

Rohit was lucky to reach his 10th ODI century, after snickometer confirmed he, then on 89, had edged Paris but Australia's caught-behind appeal was turned down by the umpire.

Rahane proved a perfect foil for Rohit, shunning risks and still finding the ropes to bring up a run-a-ball fifty in their 121-run stand when boundaries flowed from both ends.

Rohit's 127-ball knock ended in bizarre circumstances when Rahane's straight drive brushed bowler James Faulkner's fingers before hitting the stumps with the non-striker out of his crease.

After stemming the tourists' run flow in the last 10 overs, Australia returned for a strong start to their chase with Finch and Marsh denying India an early breakthrough with some fluent yet risk-free batting.

To make things worse, Ishant Sharma dropped Marsh when the batsman was 19.

Australia's opening pair eventually fell in quick succession after identical knocks of 71, but Bailey added 78 runs with skipper Steven Smith (46) and George Maxwell (26 not out) hit the winning run to complete the chase with one over to spare.

Bailey followed his 112 in Perth with a 58-ball knock that included six boundaries and a six.