As long as the game of cricket is played, it's likely no one will ever see a bowler dismiss a batsman with his nose ever again. 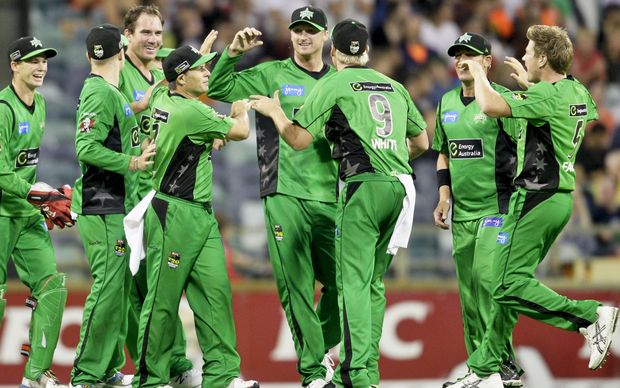 Melbourne Stars' Adam Zampa did just that last night in Australia's Big Bash T20 League when a powerfully-struck drive from the Melbourne Renegades Dwayne Bravo hit non-striker Peter Nevill's bat, cannoned into the legspinner's nose and then onto the stumps.

Nevill was short of his ground but his first instinct was to tend to Zampa who fell to the pitch clutching his nose.

Zampa's focus, however, remained on the task at hand.

"As soon as it hit the stumps I said, 'How's that? That's out!'," a bruised but triumphant Zampa said after Stars recorded an eight-wicket win.

"I knew what was happening but it was quite sore at the time.

"I've actually got to go and say sorry to (Nevill) because he was quite sympathetic and I sort of brushed him off and said 'That's out'.

"I've never seen someone get hit in the nose and then get a run out. It was a direct hit wasn't it?"

Zampa received medical attention and had surgical gauze stuck up both nostrils before finishing his over, which included trapping Aaron Ayre in front for a duck just two balls after Nevill's bizarre and painful dismissal.

The Melbourne Stars eventually took out the derby against the Melbourne Renegades by eight wickets.

"Thankfully he's all right," Nevill said after he was dismissed for seven runs in his first BBL05 game since being released from Australian Test duties.

"I was fretting a bit, it made a very bad sound when it hit him in the face - I wasn't exactly sure where it had hit him.

"I was in the process of trying to get my bat back in the crease - I obviously didn't intend to touch the ball. It's freakish for it to come off at that angle and hit him in the face then hit the stumps.

"I've never seen anything like it before - I didn't even realise I was out at the time. I probably need to take Zamps out for dinner and buy him some soup or something."