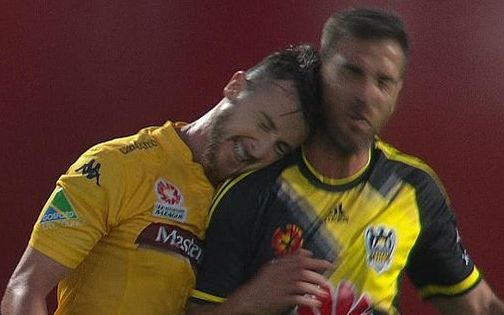 It's the second longest suspension in A-League football history.

The Irishman fronted an independent disciplinary committee last night, where he pleaded guilty with mitigating circumstances to a charge of violent off-the-ball conduct during the Mariners' 3-1 win in Gosford.

The committee accepted O'Donovan had had a momentary lapse of judgement in retaliation to Muscat elbowing him in the eye moments earlier, and also took into account his previous good record.

Muscat was yesterday handed a two-game ban for his forearm strike prior to O'Donovan's headbutt.

During the hearing, O'Donovan said the the action was to an extent involuntary as he was suffering the effects of a minor head knock after being elbowed.

As Muscat marched over to him, he felt threatened and "leaned over" to protect himself from Muscat.

"At that moment I didn't think, I just reacted," he told the committee.

However, the disciplinary committee said the act was voluntary and cited that O'Donovan took a step towards Muscat before a headbutt was made.

"We are extremely disappointed at the decision," he said.

"The disparity in sanctions issued for this match highlights the flaws in the system.

"The media circus around the incident has had a high impact on the result and we will look at our various avenues for appeal."