Arsenal moved two points clear at the top of English football's Premier League with a 1-0 victory over Newcastle, as second-placed Leicester's push faltered with a goalless home draw against Bournemouth. 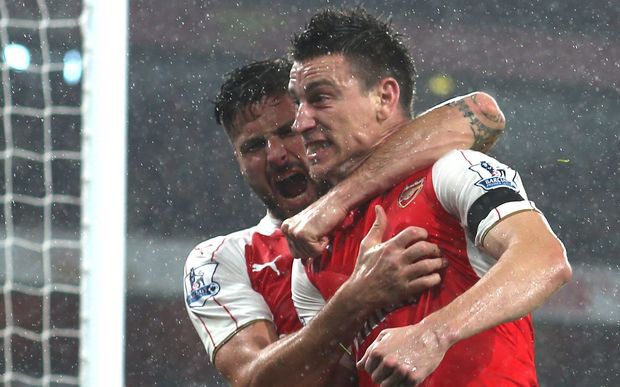 Manchester City also showed they are in no mood to give up on the title race in the late game, scoring twice in the final eight minutes to complete a superb 2-1 comeback victory over Watford.

It looked like their charge would continue to splutter as they fell a goal behind on 55 minutes when Aleksandar Kolarov glanced a header into his own net from a corner.

The match turned on its head as Yaya Toure volleyed home on 82 minutes, directing Kolarov's corner into the top corner, before Sergio Aguero headed in a Bacary Sagna cross two minutes later.

The victory keeps City in third place, three points behind leaders Arsenal and one adrift of surprise challengers Leicester.

However predictions that Leicester's unlikely surge to the summit would be short-lived gained further substance when they failed to break down 10-man Bournemouth and had a Riyad Mahrez penalty saved, to extend their winless run to three games.

That gave Arsene Wenger's pace-setters the chance to open a gap and they did not miss it, although they endured a difficult afternoon against Newcastle at the Emirates where defender Laurent Koscielny poached the winner after 72 minutes.

"It was hard work, but we prepared ourselves mentally. We were not at our best but we had to dig deep and we can do that when needed," Wenger said after his side moved to 42 points from 20 games.

Koscielny volleyed home from a corner to help Arsenal forget their Boxing Day blip, when they slumped 4-0 at Southampton, and show their mettle with a second straight victory and fifth in six games.

That sort of consistency has deserted Leicester over the Christmas period as Claudio Ranieri's team failed to score for the third successive game against a Bournemouth side who had Simon Francis sent off after 57 minutes.

There was celebration at last for Manchester United manager Louis van Gaal, whose team ended a dismal six-game winless league streak with a 2-1 home victory over Swansea City, but Liverpool boss Juergen Klopp was fuming after a 2-0 defeat at West Ham.

Wayne Rooney secured a vital victory for United with his first Premier League goal since October, a superb flicked finish in the 77th minute to settle a tight contest and move United up to fifth on 33 points.

Liverpool's erratic form continued with Andy Carroll delivering the final blow to his former club with a trademark bullet header after Michail Antonio had put the West Ham ahead early in the match.

If Liverpool boss Klopp was planning to keep his powder dry in the January transfer window he may be thinking again after witnessing an insipid attacking display that provoked a fiery response from the German coach.

"You cannot win a football match with 90 percent, you have to do everything... I don't like it."

Jermain Defoe scored twice for Sunderland whose hopes of avoiding relegation were boosted with a 3-1 win over bottom club Aston Villa, whose own plight looks increasingly bleak.

Alex Tettey scored the only goal of the game for Norwich City against Southampton, who had Victor Wanyama sent off in the second half, and Jonny Evans snatched a stoppage-time winner for West Bromwich Albion as they beat Stoke City 2-1.