Olyroos striker Jamie Maclaren has shown no remorse in punishing his former side to put Brisbane on top of the A-League football standings with a nervy 2-1 home victory over Perth. 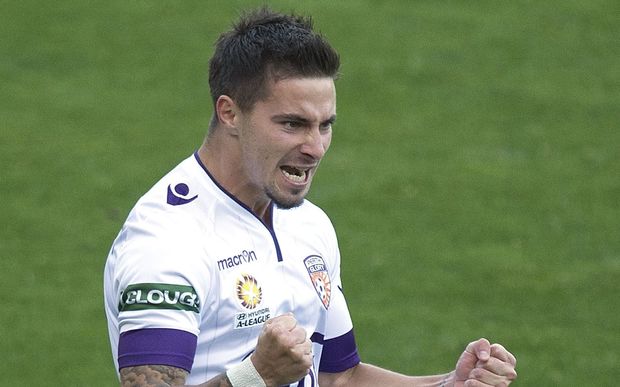 The result means the Wellington Phoenix remain sixth on the ladder, just inside the playoff places.

Also last night fourth placed Sydney FC came from behind to record a 2-2 draw with third placed Melbourne City that keeps both sides level on points.

Revelling as a starter for the Roar after leaving Perth for more game time, Maclaren produced his seventh goal of the season in a dagger to the heart of Glory fans.

Thomas Broich and Dimi Petratos supplied the classy lead-up work before the 22-year-old beat Ante Covic for the pivotal 52nd-minute breakthrough in front of a season-high 17,696 fans at Suncorp Stadium.

Making it worse for the Glory, coach Kenny Lowe freely admitted he was "crying out" for a reliable centre-forward after his side squandered several close-range chances.

Lowe could only applaud Maclaren, who was hemmed in behind Irishman Andy Keogh last season, for making the most of his move east.

"Fair play to the kid he's a good footballer," he said. "I think sometimes young lads want it too quick but we had Andy Keogh there, it was difficult for him."

However Maclaren, who jets off to Qatar this week for the Olympic qualifying tournament, wasn't about to offer his old coach any post-match condolences.

"I approached it a bit different to any other fixture because it was my old club and there was a lot of history behind it," he said.

"But that's forgotten about and I wanted to go out an do well for the new club."

Hot on the heels of Maclaren's angled strike, Roar super-sub Henrique appeared to seal the match, and top spot on the table from Western Sydney Wanderers.

But Perth made them work hard all the way to the final whistle with substitute Hagi Gligor scoring with his first touch in the 70th minute from a Diego Castro cut back.

The Glory then had two gilt-edged chances in the dying minutes as Brisbane keeper Jamie Young denied Josh Risdon in a one-on-one before Jade North cleared a shot off the line.

In a highly-entertaining encounter, it was Young who stood tallest for the Roar to take man-of-the-match honours.

Glory keeper Ante Covic put in his own fine shift, ensuring a scoreless deadlock at halftime, especially through his full-stretch dive to deny a booming Broich strike.

While Brisbane dominated most of the play with their probing passing game, it was Perth who enjoyed many of the better chances.

Lowe believed his ninth-placed side deserved a point.

"It's just frustrating when you put that much effort and endeavour," he said. "It's a bit of a heart-ache when you deserve it.

"But such is life. A little bit of pain never hurt anybody. We just have to be better with finishing."