The crew of Comanche have stretched their overnight lead in the Sydney to Hobart yacht race as three more entries withdrew from the notoriously tough event. 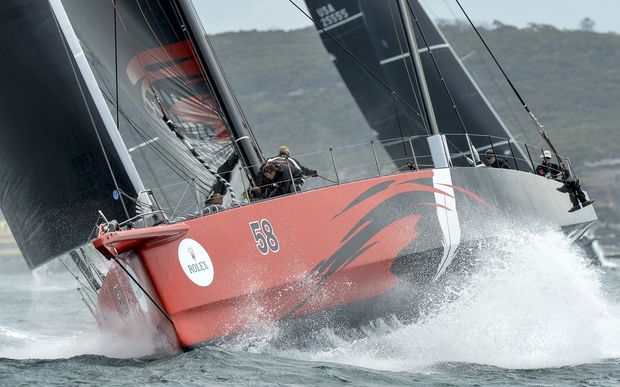 Comanche during the Sydney to Hobart yacht race. 2015. Photo: PHOTOSPORT

Crews aboard both yachts have overcome damage after each hit submerged objects.

Comanche was left with rudder damage after an incident on Saturday night while Rambler's starboard dagger board was left immovable on Sunday afternoon limiting its speed.

In third place some 46 nautical miles off the pace is Australian supermaxi Ragamuffin, with a 20 nautical mile margin over Italian-flagged Maserati.

Calm conditions off Tasmania could bring a potential late shuffle in the lead pack as the predicted finish time for the first boat to reach Hobart's Constitution Dock has been pushed back to about 9pm (NZ time).

But Cruising Yacht Club of Australia commodore John Cameron has put his money on Clark's boat.

"Comanche, with the lead she has on the rest of the fleet, will be the first boat in," he told the Seven Network.

While overnight conditions were calmer than those experienced during day one, three more withdrawals have been recorded, taking the number of retirements to 32, nearing a third of the 108-starting fleet.

Victorian boats Avalanche and Trybooking.com, along with NSW's Local Hero, are the latest recorded retirements.

Among the high-profile withdrawals on Saturday were eight-time winner and defending champion Wild Oats XI, having suffered a torn mainsail, and another Australian entry Perpetual Loyal.

The retirements have opened the way for international challengers.

Not since 2001 when Swedish boat Assa Abloy took line honours has an international entry won the race.

In the overall race standings, the early handicap leader is small NSW boat King Billy, which is due to reach Hobart on Wednesday.