Shaun Marsh has been dropped from Australia's side for their second cricket Test against West Indies, despite scoring 182 in the comprehensive first-Test victory in Hobart. 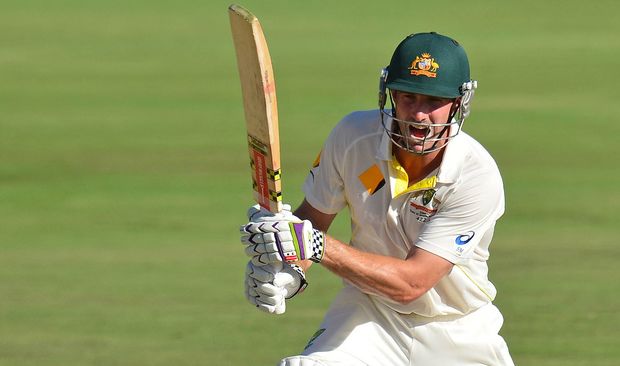 The 32-year-old Marsh and opener Joe Burns had reportedly been competing for one place in the side for the match at the Melbourne Cricket Ground with Usman Khawaja returning from a hamstring injury.

"There were lots of talks about it," Australia captain Steve Smith told reporters at the MCG ahead of the Boxing Day clash.

"Shaun is obviously really unlucky to miss out after a brilliant 180 in the last test match and 49 under a bit of pressure in the Test before."

Khawaja had been expected to return to the side, having been playing well before injuring his hamstring, scoring 174 and 121 against New Zealand.

He then scored 109 not out in a domestic Twenty20 match on Dec. 20 in his return to the field.

Smith said the desire for consistency at the top of the order had been the factor that swayed it in Burns' favour, despite the 26-year-old's form slipping since he scored 71 and 129 in the first test against New Zealand in Brisbane in November.

"Joe's been playing quite good cricket, he scored a hundred only a couple of tests ago," Smith said.

"They (Burns and David Warner) average 80 as a pair and it's pretty important to have a good opening stand."

Smith added that his side also had an eye on their tour of New Zealand in February with the decision to retain Burns with Khawaja coming back to bat at number three.

"We were always talking about what's coming up as well," Smith said.

"There's been lots of talks about it and they just believe that's the best way to go going forward."

Khawaja's return is the only change to the side that thumped West Indies by an innings and 212 runs at Bellerive Oval in Hobart with Smith confirming that his pace battery was well rested after securing victory inside three days.

"It all happened pretty quickly to win in three days so they got that extra rest," he added.

"They're all bowing really well so well stick to the same attack."