India rode Ajinkya Rahane's cultured century to post a series-high 334 before returning to skittle out South Africa for 121 to take full control of the fourth and final test in Delhi. 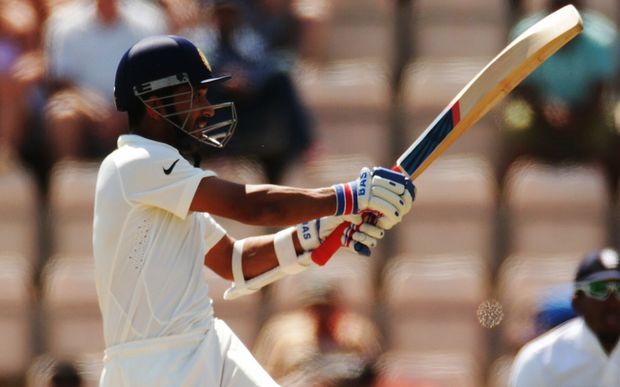 Rahane (127) crafted the first century in the low-scoring series over five painstaking hours and also featured in a 98-run eighth-wicket stand, the highest in the series, with Ravichandran Ashwin (56).

Spinner all-rounder Ravindra Jadeja (5-30) then orchestrated South Africa's rout in glorious sunshine at the Ferozeshah Kotla stadium as the hosts thoroughly dominated the second day's play but did not enforce the follow-on.

Temba Bavuma (20) dragged a Jadeja delivery onto his stumps, Hashim Amla (three) fell after his 34-ball ordeal and Faf du Plessis recorded his third duck of the series after playing an outrageous scoop shot.

With wickets tumbling at the other end, AB de Villiers waged a lone battle before holing out for 42.

Earlier, India resumed day two on 231-7 and Rahane, on 89 overnight, stitched a third 50-plus partnership in the match with Ashwin before bringing up his fifth test century with an immaculate straight drive past fast bowler Kyle Abbott.

An industrious batsman in a lineup teeming with flamboyant strokeplayers, the 27-year-old raised his arms and looked skywards in a mixed sense of relief and elation, having failed to go past 15 in the ongoing series.

Celebration followed with Rahane launching off-spinner Dane Piedt over mid-wicket and long on for two sixes in three deliveries.

The number five fell to a soft dismissal, driving Tahir to AB de Villiers at cover to depart after crafting a stellar knock over five hours with the help of four sixes and 11 boundaries.

"I felt (I should be) spending time in the middle - taking my time and just playing normal cricket, rather than look to play some attacking cricket," Rahane said.

"It was not easy for shotmaking but it was not difficult (to bat) either."

Ashwin, currently the leading wicket-taker in the series, hit Tahir for a six to bring up his sixth test fifty to prove he was no dud with the bat either.

Abbott dismissed Ashwin and Ishant Sharma in three deliveries to finish with 5-40 but the visitors could not stop India from posting the first 300-plus score in the series.

"It's a good thing when your lower order is batting well. That partnership was crucial," said Rahane.

"Guys at eight, nine, 10 and eleven -- if they can contribute, the opposition's morale goes down. The partnership with Ashwin was really important."