The former All Blacks loose forward Tanerau Latimer will return to Super Rugby in New Zealand with the Blues.

Latimer, a five test All Black, Maori All Black and Commonwealth Games gold medallist with the New Zealand Sevens, played 109 times for the Chiefs after making his Super Rugby debut for the Crusaders in 2006.

He played for the Chiefs between 2007 and 2014 before moving to Japan last year to play for the Toshiba club. 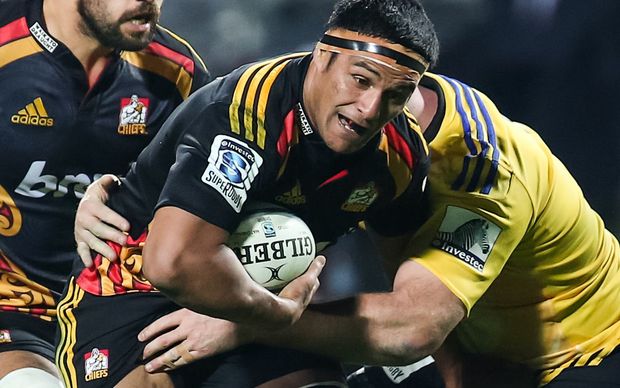 After eight seasons with the Chiefs, the former All Black loose forward Tanerau Latimer is to play for the Blues. Photo: Photosport

Latimer will play in next year's Super rugby competition as a stand-in for loose forward Akira Ioane who is ear-marked for the All Black Sevens campaign and then return to Japan.

"The club (Toshiba) has been great and very supportive, but I have missed the tough physical nature of Super Rugby on a week-in, week-out basis," Latimer said.

Latimer said the lure of playing under new Blues coach Tana Umaga was a major factor in his decision, as well as the chance to take a leadership role with a young team.

"I never thought my Super Rugby days were over and that there was always a possibility that I would come back to play."

He will return in the New Year after the Japan season is completed.

Latimer's wife has recently given birth to their second child, which was also a factor in his decision.

"Bringing the family back for a bit of time in New Zealand is great. You don't really appreciate what home means until you move away and with a new baby, to be able to spend a few months back home will do wonders.

Umaga said the signing of Latimer was a major one for the club.

"We have a very young and exciting group. Tanerau always set high standards for himself and his teammates on and off the field, and his influence will be massive for us," he said.