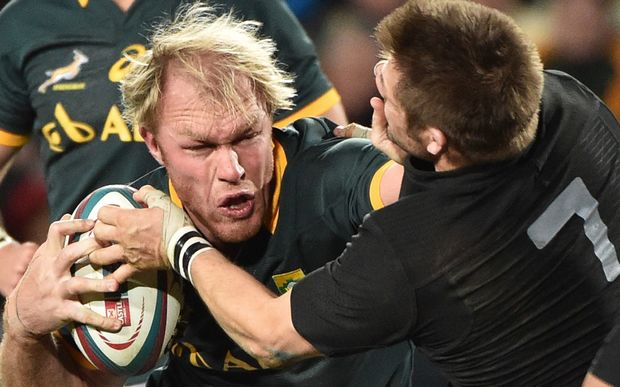 Schalk Burger of the Springboks tries to hand off Richie McCaw of the All Blacks. Photo: PHOTOSPORT

McCaw said he's ready to embrace the physical challenge from the Springboks after taking the defending champion New Zealanders side through their final captains run before their biggest match in four years.

He said his body's taken a beating in the 25 Tests against the Springboks and he'll happily adorn new scars for a semi-final win.

"That sums up the intensity of test matches between the Springboks and All Blacks. Tomorrow will be another step up," he said of their semi-final at the Rugby World Cup.

"It'll be a brutal game, but these are the games I love."

"I've got the odd scar, but that's just part and parcel [of playing rugby]."

McCaw said the matches against the Springboks are "some of the toughest rugby you ever play."

"They test you, and these are moments I enjoy. That opposition with that sort of intensity is the way to play the game," he said. "And if we get the job done, I'll take any scar that comes along with it."

McCaw, who is expected to retire after the World Cup, will set a tournament record in captaining his side for the 12th time in the competition in the London knockout game.

The loose forwards have been playing each other for over a decade and with McCaw expected to retire after the tournament, Sunday could be their last meeting.

"Schalk is the epitome of the physicality the Springboks bring, and I relish those opportunities," McCaw said.

"Tomorrow is another opportunity, and if I never get to do it again, well, I wouldn't mind making this one to remember."

Burger reciprocated McCaw's comments, hoping South Africa will help him secure future bragging rights over a player he said has won more Test matches than he has played.

The sense of respect and admiration in that comment is that Burger has represented South Africa 84 times while McCaw will win his 147th cap on Sunday and will be seeking his 130th victory.

To compare his record, Burger said, would be like a golfer comparing himself to Tiger Woods. "It's pretty tough", the 32-year-old dynamic ball carrier said.

The pair are friends - Burger will try and chat on the field, although he admits "that's pretty difficult to do with Richie". But they will share a beer whatever the outcome and reminisce about "days gone by".

"We have become good mates, played against each other since 2003, and there have been a fair few contests and unfortunately I have been on the losing side of most of them. Let's hope I get some bragging rights tomorrow as it will be the last time we play against each other," said Burger, who has lost 10 and won five of his Tests against the All Blacks.

"Obviously on the field we are equals. We play a bit of a different style. We both have a massive work rate so we find each other at the bottom of the rucks, tackling or carrying the ball a hell of a lot."

Carrying the ball is something Burger has done more than any other player in this tournament - a total of 80, which is 20 more than the next player.

For Burger, the key to containing a potent All Blacks backline starts with stopping Julian Savea, the leading try-scorer in the tournament with eight.

"I hope he never runs at me - it would be mildly terrifying to say the least," he joked.

"The big thing about them is their attack is phenomenal. They back their execution and skillset so they put you under more pressure than any other team in the world.

"When we've beaten them (only twice in the last 12 meetings) it starts with defence, not letting them have any tempo on the ball, trying to slow them down but then we create a lot of opportunities."