England seemingly have a stranglehold on the first Ashes cricket Test after setting the tourists 412 to win with two days remaining in Cardiff.

Joe Root again put Australia's bowlers to the sword and together with Ian Bell gave England the platform on Friday to push for victory . 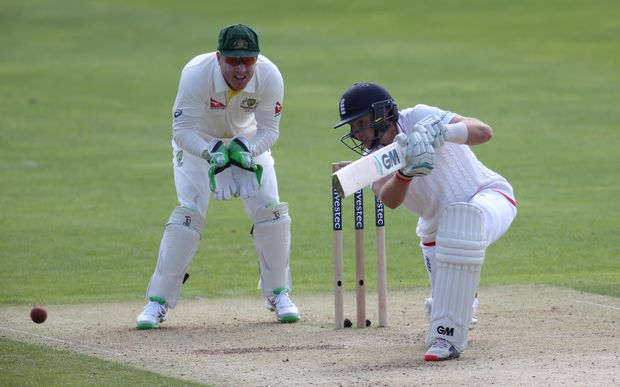 Root followed up his first-innings century with another stylish knock of 60 and Bell (60) ended a poor run of form as England, desperate to atone for their humiliating 5-0 reverse in 2013-14, were bowled out for 289 to end an eventful third day's play in which 15 wickets fell.

Australia did fight back in the last hour by taking five wickets but some lusty blows from tailender Mark Wood (32 not out) allowed England to set an imposing target on a pitch offering some signs of life after a docile first two days.

Australia have chased down only one 400-plus total in Ashes history - 404 in 1948 - but forecast rain may come to their aid on the final day.

Establishing a lead of 122 after the tourists lost their last five wickets for the addition of 44 in the morning, England recovered from the early departures of Alastair Cook and Gary Ballance with Root again to the fore.

After Adam Lyth hit a belligerent 37 before being brilliantly caught at slip by Michael Clarke, Bell eased into form that made a mockery of his total of 56 runs in nine previous test innings.

His serene half-century included 11 boundaries and sumptuous cover drives, taking his lead from Root who again strode out to the wicket full of confidence and intent.

Bell's innings came to an end on the next delivery after crashing Mitchell Johnson over the covers, playing inside a good length ball to be bowled - the paceman's first wicket of the match after 36 fruitless overs.

Root was quick to seize on anything with width, much to a capacity-crowd's delight at Sophia Gardens, and may have lost concentration when he was pinned on the back foot by Josh Hazelwood and was bowled off his pads.

Australia were on the backfoot from the start of day three when they lost Shane Watson (30) and Nathan Lyon (6) with the addition of one run to their overnight score.

Veteran wicketkeeper Brad Haddin, who enjoyed a superb Ashes series in 2013-14 when he finished top of Australia's averages with 493 runs, fell to James Anderson who polished off the innings with the new ball.