The tennis world number one and defending champion Novak Djokovic has squeezed into the quarter-finals at Wimbledon following a thrilling fourth round match that spanned two days. 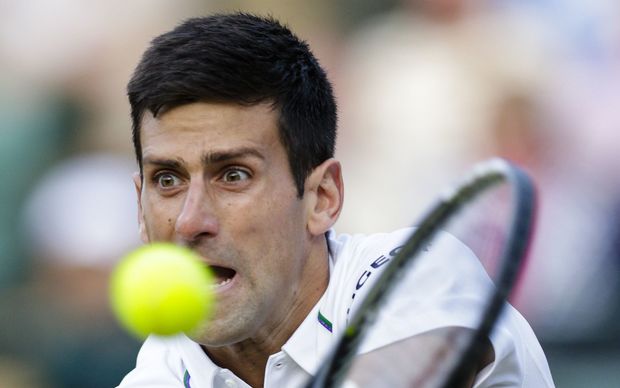 The top seed won his one-set shoot-out against the big-serving South African Kevin Anderson 6-7, 6-7, 6-1, 6-4, 7-5 after the match was halted at two sets all yesterday because of bad light.

The Serb will next play Marin Cilic in tonight's men's quarter-finals.

After the match Djokovic walked away a mightily relieved man.

"I was two sets down, to come back and win in five gives me great satisfaction and confidence for the next challenge," he said after the normal order was restored.

"I think he served exceptionally well. This was one of the most difficult matches I have played at Wimbledon and maybe in my career."

The players had walked out to cheers from the crowd but the entry proved premature, with umbrellas going up and the rain covers hurriedly pulled across Court One as the pair returned to the locker room.

When the match eventually re-started, 16 hours and 33 minutes after the last point had been played, Djokovic was immediately back in the line of fire.

Anderson blasted down two aces, followed by a backhand volley and then another bullet that fizzed past Djokovic, to hold serve without giving the Serb any hope of replying.

Djokovic had to save two break points in the fourth game, holding serve for 2-2, with Anderson keeping up the pressure by rattling through the next game without dropping a point.

The next games went with serve to 5-4, with Djokovic needing all his focus as he served to stay in the match. Job done, he then broke Anderson to go 6-5 up and served for the match at 40-30 with the South African's final return hit long.

Meanwhile Djokovic promised to apologise to a shaken ball girl for an outburst during his tough five set victory.

The world number one let rip midway through the tense final set.

Asked about the incident, he expressed surprise and said the anger was aimed at himself, although he appeared to be calling for a towel and gesticulating angrily at the ballgirl.

"I'm sorry. There was nothing towards her," the top seed said after reaching a 25th successive grand slam quarter-final with what he called one of the toughest matches of his Wimbledon career.

"Maybe she was just afraid of my screaming there. I was pretty close to her. I'm definitely going to try to apologise to her if I did something wrong."

Djokovic had to do the same to a ball boy after a similar incident during this year's Miami Open final when he raged in the direction of his entourage in the players' box and snatched away a towel.

Sometimes, the Serb said, he could not hold it all in.