First-five Lima Sopoaga and wing Waisake Naholo did their chances of an All Blacks call-up no harm as they helped the Highlanders into the Super Rugby semi-finals with a 24-14 victory over the Chiefs in Dunedin. 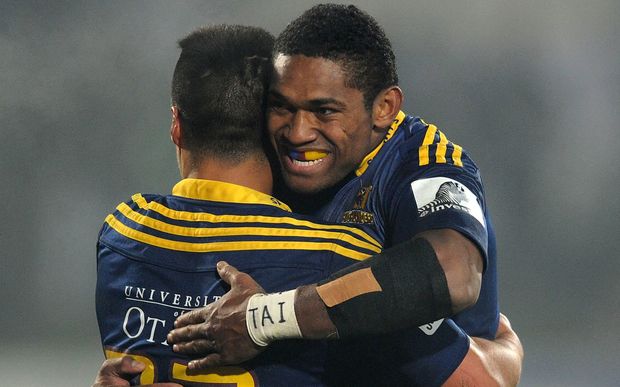 Waisake Naholo and Jason Emery of the Highlanders celebrate after defeating the Chiefs. Photo: PHOTOSPORT

The Highlanders, playing their first Super Rugby knockout match at home since 1999, advanced to the final four for the first time in 13 years with the victory.

Sopoaga and Naholo have been touted as possible surprise inclusions in Steve Hansen's extended All Blacks squad which will be named later today, as the world champions build to their title defence in England later this year.

Sopoaga slotted four penalties and a conversion for the home side, while Naholo combined beautifully with halfback Aaron Smith to score two tries and made several barnstorming runs, one of which was unlucky not to produce a first-minute try to fellow wing Patrick Osborne.

Referee Chris Pollock, however, asked for the replay to be checked and the television official said Naholo had been in touch when he passed to Liam Coltman, though there was doubt as to whether his foot was grounded outside the line.

Naholo did score the only try of the first half when Smith exploited poor defence down the blindside with the pair supporting each other before the winger took the final pass to cross in the corner.

The Chiefs managed to stay in the game with some superb counter-attacks from deep that allowed them to gain field position from which first-five Andrew Horrell slotted three penalties to give his side a 9-8 lead at the break.

Smith, however, again exploited the blindside close to the line, drawing in defenders that opened up Naholo's wing and allowed him to score his Super Rugby leading 11th try of the season just two minutes into the second half.

"We'll savour this moment but another big job next week," Highlanders captain Ben Smith said. "It's a massive buzz playing in front of this (crowd). The boys really appreciate the support."

"We managed to play in the right areas of the field and we used the ball quite well."

"It's a good Chiefs team. They really put us under pressure for the whole 80 minutes and I'm glad we managed to scrape through."

Chiefs lock Brodie Retallick, who seemed to be involved in all of the early confrontations and shoving matches between both sides, crossed with 20 minutes to go after his pack hammered at the Highlanders in close to reduce the margin to 18-14.

Sopoaga slotted his third penalty five minutes later to give the Highlanders space and while they were under immense pressure for the rest of the game the crowd of 22,500 roared them on before Sopoaga kicked his fourth penalty in the final minute.

The Highlanders will travel to Sydney to play the defending champion Waratahs in Friday night's first semi-final.

Top qualifiers the Hurricanes will host the Brumbies in Saturday's second semi-final.

Look back at commentary of the match here.