The NSW Waratahs climbed to the top of Super Rugby's Australian conference and likely ended the Crusaders 13-year finals run with a 32-22 home win in a brutal but thrilling clash in Sydney. 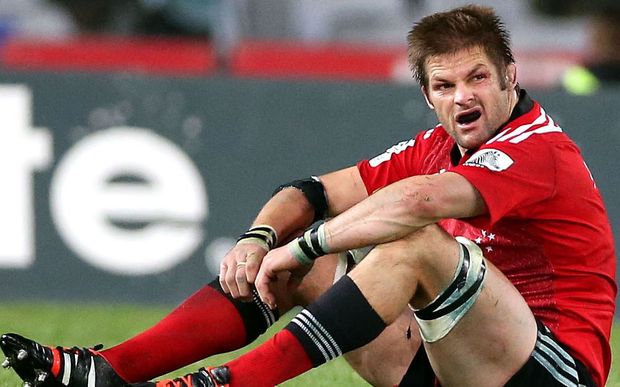 The Waratahs led 25-8 early in the second half last night but the Crusaders piled on 14 unanswered points to get within three with fewer than 15 minutes to go.

The Waratahs first-five Bernard Foley clinched the bonus-point win two minutes from the end when he scored their fourth try, chasing through his own kick and sliding over the line after Crusaders winger Nafi Tuitavake couldn't handle the ball.

The Crusaders, who started the round in ninth spot, played out the last 10 minutes with 14 men after champion flanker Richie McCaw was sin binned for entering a ruck from the side.

Hulking Fijian Taqele Naiyaravoro scored two tries for the hosts, with fellow winger Rob Horne and Foley bursting clear for the other two five pointers as the defending champions moved top of the Australian Conference with only three matches remaining.

The Sydney-based side sit three points clear of the ACT Brumbies after their ninth win of the campaign.

The Crusaders have missed the playoff only three times in 19 years and not since 2001 but the seven-times champions stand staring at an unusually early finish to their campaign following a seventh defeat in 13 matches.

They trail the Super Rugby leading Hurricanes by 26 points in ninth place in the overall table and are away at the table toppers next week.

The Crusaders had burst out the blocks with a try in the second minute by their own muscular Fijian winger Nemani Nadolo after Naiyaravoro had fumbled the kick-off.

Naiyaravoro put behind the error to finish a sweeping Waratahs move with a try in the corner five minutes later.

The Crusaders looked set for a second try, with Waratahs hooker Tolu Latu in the sin bin, but first-five Colin Slade fumbled a pass with a grateful Horne scooping up the ball deep in his own half and racing clear to touch down under the posts.

Slade then departed with a knee injury as the momentum swung firmly in the favour of the Waratahs in the lung-busting physical encounter.

The Waratahs added a third try in the 52nd minute with Israel Folau again providing the final pass for Naiyaravoro to score in the corner to stretch the lead to 25-8.

But the Crusaders refused to lie down.

All Blacks skipper Richie McCaw, on his return to the team, crossed for a try after Nadolo fortunately fumbled straight to him, then flanker Matt Todd emerged from the bottom of a rolling maul for their third score.

Dan Carter converted from the touchline to make it 25-22 but McCaw was crucially sin-binned for side entry at a ruck to leave the Crusaders a man short for the final 10 minutes.

Foley made the most of the space to wrap up the win by kicking clear and sliding over for the bonus-point try in the 77th minute, which he converted to take his personal haul to 17.