Tensions nearly boiled over as the New South Wales Waratahs' rollercoaster season continued with a torrid Super Rugby win over the Sharks.

In an ill-tempered affair, Michael Cheika also fumed in the Waratahs' coaches' box before his players regained their cool after a series shoving matches to eke out a much-needed 33-18 victory in Sydney.

Cheika was livid after referee Rohan Hoffman penalised prop Benn Robinson for apparently entering a ruck from the side as the Waratahs pressed the Sharks line just before halftime. 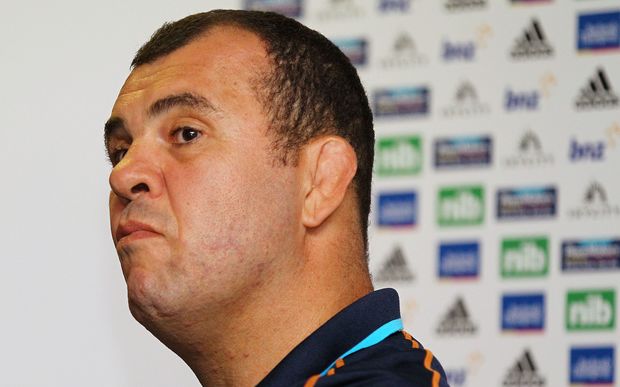 The incident sparked a melee in which Waratahs hooker Tolu Latu escaped with a warning after his wild swing failed to connect with the head of the Sharks' Lwazi Mvovo.

It was a fiery end to a half that began with Waratahs centre Adam Ashley-Cooper diving over under the posts after just 52 seconds following a beautifully worked set move from a lineout.

Two penalty goals each to Foley and Sharks centre Francois Steyn were the only additions to the scoreboard before the two sides broke for halftime.

Cheika's mood didn't lighten when the Waratahs were caught napping after conceding a penalty in the 49th minute.

Rather than kick for touch, the Sharks five-eighth Lionel Cronje kicked crossfield for unmarked winger Odwa Ndungane, who swooped on the ball to stroll over untouched in the right-hand corner.

Foley added the extras, but the Waratahs' nine-point buffer only lasted two minutes before a converted try to Steyn reduced the margin to 20-18.

But two more Foley penalties, a late try to the five-eighth and a dubious no-try ruling against Sharks winger JP Pietersen sealed victory for the Waratahs.

The end scoreline flattered the titleholders, who climbed back into the top six ahead of a 2014 final rematch next Saturday night with the Crusaders.