Rugby greats Richie McCaw and Dan Carter are likely to play their last game on their home turf at Christchurch tonight. 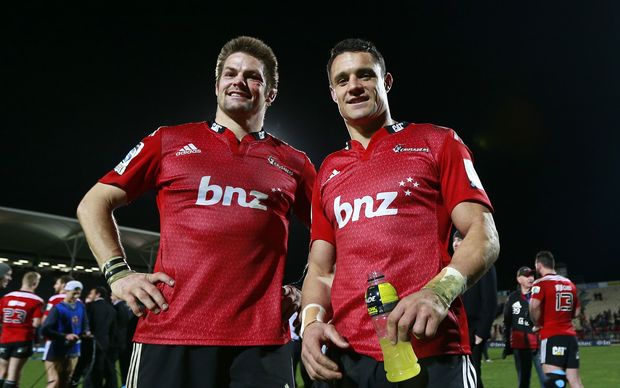 The pair are turning out for the Crusaders, who are taking on the Reds in what is likely to be the Canterbury-based team's last home game this Super Rugby season.

McCaw has indicated he may retire after this year's Rugby World Cup and Carter is going to play for a French club.

McCaw has played 140 games for the Crusaders, accruing 130 points, while Carter has turned out 135 games and scored a huge total of 1650 points.

The Canterbury Rugby Supporters' Club president, Dick Tayler, said the pair had made an enormous contribution to both rugby and the Canterbury province.

Calling them sons of Canterbury, Tayler said McCaw and Carter's public appeal was uniquely high because they were nice, humble people, as well as high class rugby players.

They were also known for the time they dedicate to helping other players, he said.

People attending the game at AMI Stadium will be asked to stay on to watch a video tribute to the players and a souvenir programme has been prepared for the match.

Carter is starting at second-five, while McCaw is returning to the bench after suffering a knock to his head during the Crusaders' game against the Blues last month.

Carter said he had been focusing on tonight's battle against the Reds, rather than the nostalgic situation, but believes there will be some sadness after the game.